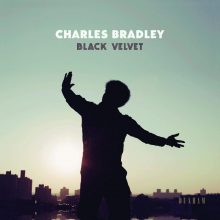 Black Velvet, Charles Bradley’s posthumous fourth album, is meant to be a celebration of the life and work of the late soul singer. The “Screaming Eagle of Soul” would have turned 70 on November 5, and the album’s release date was timed to commemorate his birthday.

The album features previously unreleased tracks—all of which were recorded during sessions for Bradley’s prior releases: No Time for Dreaming (2011), Victim of Love (2013), and Changes (2016). “I Feel a Change,” a single released in September, is a moving tribute to the singer that features black and white videos of Bradley during a studio session and a performance on stage.

Other songs include hard-finds such as “Luv Jones,” Bradley’s duet with fellow soul musician LaRose Jackson, and “(I Hope You Find) The Good Life,” previously released on a limited edition EP in 2014. Also included are three divergent covers performed by Bradley: Sixto Rodriguez’s “Slip Away” from his 1981 album Alive, Neil Young’s “Heart of Gold” from his 1972 album Harvest, and a surprising cover of Nirvana’s “Stay Away” from their 1991 album Nevermind.

Bradley died of complications from stomach cancer over a year ago on September 23, 2017 in Brooklyn, NY. If people have not already been convinced, Black Velvet surely solidifies Bradley’s placement within the lineup of America’s most talented and beloved soul singers.