Between 2013 and her release Love the Woman in 2008, a lot has changed for Grammy-nominated R&B artist Chanté Moore. The soul chanteuse has not only become a solidified reality show star on TVOne’s R&B Divas LA, but also ended her nine year marriage to soul crooner Kenny Lattimore, both of which Moore uses as motivation for her sixth solo studio album, Moore is More. Released in July of 2013, the introspective offering encompasses emotions ranging from liberation and joy to unapologetic candidness, all of which Moore reassures are quite deliberate.  On Moore is More, the singer makes no qualms in highlighting her signature whistle register on a number of tracks that could be described as a gumbo of genres seasoned in soul. With production headed by Antwanne Frost, Kwamé, and Chris Davis, her voice shines effortlessly on tracks such as “Talking In My Sleep” (below) and the gospel-influenced “Jesus, I Want You.”  Guest appearances on the album are limited to the renowned Chicago emcee Da Brat on the dance-pop friendly “On And On,” which only enhances Moore’s showcase of talent. 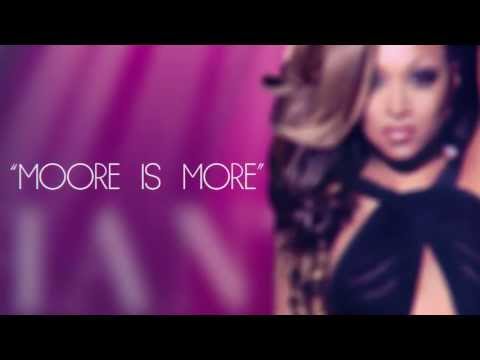 On the other hand, lyrical depth suffers to the point of simplicity in lieu of vocal ability, especially on tracks such as “Baby I Can Touch Your Body” and “Don’t Make Me Laugh.”  In addition, the Kwamé-produced “Doctor, Doctor” also seems misplaced in an effort to fit the current trend in urban music saturating the radio waves. However, Moore makes sure to end on a high note with a stunning rendition of the jazz standard “Cry Me a River” (originally by Arthur Hamilton). Although quite different from albums such as Precious (1992), This Moment is Mine (1999), or the duet album with then-husband Lattimore Things That Lovers Do (2003) that made Moore a respected singer of her generation, fans of Chanté’s previous efforts will not be disappointed with Moore is More, as it shows her vocal prowess has only appreciated with time.