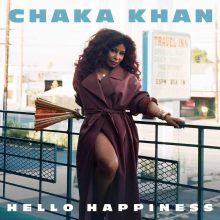 Chaka Khan’s new album, Hello Happiness, is a short, seven-track release that is somewhat of a departure from her previous work. Many listeners will associate Khan with her classic hits such as “I’m Every Woman,” which would lead them to expect a strong vocal showing. However, one might find this newest release more barren of Khan’s vocal prowess than anticipated. But before a decision is made to not give this album a chance, understand that the lessened presence of Khan is more attributed to a difference in production than a diminishing of her abilities. Chaka Khan’s powerful voice is used to complement contemporary production practices that are at times ambient in nature.

First and foremost, the album is synth-heavy, which is true of a lot of great vocal albums of the past, but differs from Khan’s previous body of work. “Like a Lady” is an example of a synth-based vehicle on which Khan’s voice is used along with a palette of electronic instruments and studio effects to create a modern club atmosphere. Herein lies the main criticism of Hello Happiness—Chaka Khan is at times lost in the recording at the expense of the production. Despite this point, however, fans of Chaka Khan may get just enough of her voice to consider it a success.

The album’s title track is a dance pop song that lulls the listener into a repetitive groove before launching into a bridge consisting of some surprising chord changes. This is also the one section of the song where Khan’s voice is really showcased. “Don’t Cha Know” and “Ladylike” give the listener a little something different with the addition of guitar. But “Too Hot” is the standout track on the album from the standpoint of being able to hear and feel Khan’s voice in a pseudo-blues setting where she really belts it out. Another track, “Like Sugar” provides more of the funk that fans expect.

Hello Happiness is a good album, but sometimes feels more like a project featuring Chaka Khan as a background vocalist. Nevertheless, it is nice to see her back in the spotlight, as this is Khan’s first release since Funk This in 2007. Listeners of Hello Happiness will fall into two camps—those who miss Khan’s old style, and those who find it to be a step forward production-wise. There is no right answer here, and regardless of how one feels about the album, Chaka Khan remains one of the great female vocalists of all time.