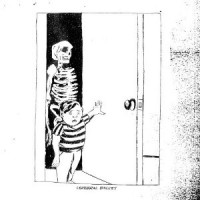 Cerebral Ballzy’s self-titled debut is fun, angry, goofy and violent, calling to mind (possibly regretful) memories of teenage punk revelry. The East Village’s own Cerebral Ballzy are a young group with clear musical ties to the ‘80s hardcore punk scene, bringing to mind Suicidal Tendencies and perhaps a more polished Bad Brains. The band does not necessarily bring anything strikingly new musically to the punk table. What they are joyously successful at is their ability, to use the vernacular, to “up the punx.”

To “up the punx” is to raise behavior to a new standard of punk-rock-rebellion and this album does that so well. Some people might perceive a mixed-race group of young men from a less than safe urban setting who don’t sing about the political ramifications of their position in society to be the opposite of punk, but they would be missing out on one of the most important aspects of the subculture—not caring what other people think. Tracks like “Don’t Tell Me What to Do” comment on the rampant commercialism and inescapable marketing campaigns that hound today’s society—not from, say, a radical Marxist standpoint—but instead approaching the issue from a pure and simplistic teenage vantage:

You don’t know what’s best for me
And I do.
And even if I don’t,
I’ll find out soon!

There are songs on this album about girls, drugs, drinking, pizza and not listening to authority figures. It is the sonic version of the cool slacker’s notebook doodles from your Algebra II class. If you’ve ever envied that kid, or were that kid, Cerebral Ballzy’s album will put a smile on your face and a push in your mosh pit.