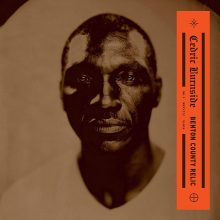 Cedric Burnside is keeping the northern Mississippi hill country blues alive, a tradition he was literally born into and raised up to perform. Young Cedric frequently played alongside his grandfather, the great blues guitarist R.L. Burnside, and his father, drummer Calvin Jackson, as well as other family members, often combining three generations of talent in one band. Cedric’s uncle, bass player Garry Burnside, also contributed to the Cedric Burnside Project, the group featured on his Grammy nominated 2015 release, Descendants of Hill Country. Though he’s only 40-years-old, Cedric no doubt feels like an old soul and culture bearer, hence the title of his latest album, Benton County Relic. His music, however, is anything but archaic.

Known for infusing traditional hill country blues with contemporary funk and soul, Cedric doesn’t disappoint on these 12 tracks. Working with a new collaborator—drummer and slide guitarist Brian Jay (The Pimps of Joytime)—the two met up in Brooklyn and amazingly laid down these weighty tracks in a two-day period. There’s no indication how this collaboration began, but what’s important is that Cedric and Brian really lock into the groove, with both contributing guitar, drums and vocals.

The album opens with “We Made It,” a very personal account of Cedric’s life growing up in Mississippi, where despite his family’s poverty and lack of what most would consider the modern essentials, he affirms “we made it, yes we did.” Getting a little funkier, “Get Your Groove On” has elements of a Jimi Hendrix fuzzed out blues-rock song. Turning to the topic of heartbreak, “Please Tell Me Baby” is sparse on lyrics but the driving beat and guitar solos get the message across.

“Typical Day” is just that, with Burnside recounting a typical day in his life:

Concluding with the anthemic “Ain’t Gonna Take No Mess,” Burnside and Jay unleash everything they’ve got, and that’s quite a lot! From reverb laden electric guitars to ferocious vocal lines, the song will seep into your core and take root, ready to be pulled out the next time someone tries to mess with you.

Benton County Relic may venture away from strict blues formulas, but all for the better when the end result is pulsing with electric guitars, grooving beats, and gritty vocals that never forget their deep roots in the hill country of northern Mississippi. Cedric is currently touring the U.S. through the end of the year, so don’t miss the opportunity to hear the third generation of the legendary Burnside family in person.