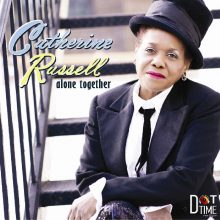 Born and raised in New York City, Catherine Russell comes from an impressive musical lineage. Her father, Louis Russell, worked as band member and music director for the great Louis Armstrong, and her mother, Carline Ray, was a pioneering bassist/guitarist/vocalist and holder of advanced degrees from Juilliard and Manhattan School of Music. With a family like that there is no surprise that Catherine Russell is able to perform with such a level of mastery and expertise. Now, with her seventh studio album, Alone Together, Russell reinvigorates the classic feeling of a vocal jazz album.

Alone Together consists entirely of early jazz and R&B standards from the 1920s-40s, including  a couple of well-known tunes such as the title track and the Louis Jordan classic, “Is You Is Or Is You Ain’t My Baby.” Russell also sheds light on a few undeservedly obscure tunes like “He May Be Your Dog, But He’s Wearing My Collar” and “You’re Not the Only Oyster in the Stew.” The songs Russell has chosen for this project are meant to comment on the timeless questions that we ask ourselves and one another in times of love and heartache. This is made abundantly clear through other stand out tracks like the Irving Berlin standard, “When did You Leave Heaven,” Louis Jordan’s “Early in the Morning,” Jimmy van Heusen’s “Shake Down The Stars,” and “I Only Have Eyes For You” by Harry Warren.

Russell takes the time to show us her capability as a storyteller by making sure that each of these tunes has major elements of blues, putting a much stronger reliance on the lyric. She explains, “Blues infused jazz tunes are the ones I gravitate towards, because they enable me to freely express myself in the moment.”  Featuring the core of her touring band, including guitarist Matt Munisteri, pianist Mark Shane, bassist Tal Ronen, and drummer Mark McLean, Catherine Russell has created a jazz vocal album that just feels good.