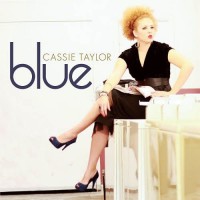 Like father, like daughter may not be a commonly used phrase, but in the case of Cassie Taylor, daughter of musician Otis Taylor, it’s applicable. Cassie regularly tours, performs, and records with her father, and plays bass on his new album, Contraband. She is also featured on the Girls with Guitars compilation with fellow singer/songwriters Samantha Fish and Dani Wilde, and is currently touring with her neo-blues power trio Cassie Taylor & the Soul Cavalry.

Blue, Cassie’s solo debut, indeed keeps blues at the core. While at times the album may suffer from weak instrumentation, Taylor utilizes a nice helping of pop to keep things interesting. The combination is most successful on tunes like “Black Coffee” and “Goodbye,” where blues and pop complement each other nicely. For the remainder of the album, Blue teeters between decent and good, as either pop vocals support the weak blues instrumentation or both flounder. But with Taylor’s vocal talent, Blue proves to be a good start for a promising career that may someday rival that of her father.

Following is a video of the live performance of “Black Coffee”: