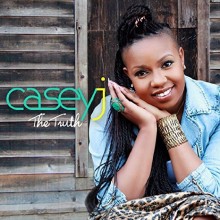 The Truth!  And it was Pontius Pilate who once asked the very important question to Jesus: What is the truth? Probably for Casey J. Hobbs, fondly known as Casey J, truth is to be located in the life and lived reality of gospel worship music production. Her recent album The Truth was therefore primarily produced in a live worship session on January 30, 2015, at Fresh Start Church in Duluth, Georgia. Not in the studio! For her, gospel worship must really be live and hence lived.

Casey started out as a teacher  but was laid off, something that proved to be a grace inasmuch as she suddenly rose to become one of “the Top Ten of three different Billboard Magazine sales or airplay charts with her powerful debut radio single ‘Fill Me Up,’” as her biography puts it. The single constitutes the 9th and 12th track in the present album. Indeed it was a sign of greater things to come.

Listening to the first track of the album, “Let it Be Known,” one is immediately impressed by the confidence exuded and by her new approach to gospel performance. Indeed, it is all about a modern communal gospel-based worship. This is confirmed in the title track, “The Truth,” that bursts forth with an upbeat rhythm and full melodic accompaniment, while the message “You are my truth” is aggressively stated. On the song “I’m Yours,” she brings out what Bob Marovich refers to as “the ebullience of Casey’s vocal delivery, which oozes with optimism and kinetic energy,” a factor contributing in making the album a break out hit. In the brisk and breezy “Better,” the listener is treated to Casey’s energy and optimism. The same mien is seen in “Have Your Way,” a duet which Casey performs with Jason Nelson, which demonstrates her penchant for solid, almost orchestral-sized pop accompaniment. Other noteworthy tracks include “Oh You Bring,” “Your Heart,” “Never Run Dry,” and “Journal.”

Casey brings to gospel performance an attitude of total dedication. For her, “people and worship are my heart.” In saying this she desires “the environment of [her] performances to be about the worship and not so much about [herself as a person] or [her] artistic persona.” Her gospel “isn’t a traditional church sound – [but] worship in its purest form.”