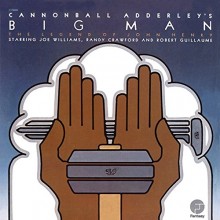 Even if they don’t realize it, most people have probably encountered the legend of John Henry, the “steel driving man,” at some point in their lives, whether it is in the form of a folktale, a Johnny Cash song, or the Disney animated version featuring James Earl Jones. One of the lesser known versions is the score for a musical about John Henry composed by the great jazz saxophonist Julian “Cannonball” Adderley during the last years of his life (he died on August 8, 1975).

Cannonball Adderley is most well-known for his 1966 single “Mercy Mercy Mercy,” as well as his work with Miles Davis. Big Man: The Legend of John Henry shows that Adderley’s talent ranged far beyond jazz, encompassing many other genres: soul, funk, blues, folk, gospel, and Afro-Caribbean music. Originally released as a two-LP set in 1975, Big Man featured music from many other artists, including his brother Nat Adderley, George Duke, Roy McCurdy, Airto Moreira, and Carol Kaye. Real Gone Music’s reissue marks the first time the album has appeared on CD, and features extensive liner notes by Bill Kopp.

The album includes both musical numbers and separate dialogue, with characters voiced by Joe Williams (John Henry), Randy Crawford, and Robert Guillaume. On “Gonna Give Lovin’ a Try”—one of the six full musical pieces that are presented as standalone tracks—Randy Crawford sings her heart out, her smooth voice backed by a large string section. Big Man was her professional recording debut, recorded when she was only twenty-one. “Next Year in Jerusalem” has more of a funky sound and is sung by Joe Williams. His scratchy voice drives this upbeat song and adds some deep soul.

In a message from Nat Adderley included in the liner notes, he says that “Cannon considered Big Man one of the most important projects of his whole career.” Composing the score for a full-scale musical certainly was a challenge to take on, but Cannonball had every reason to be proud. Forty years later it still is a masterful “folk musical” featuring beautiful songs and a powerful storyline about the interplay of class and power.