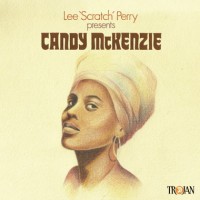 In 1977 Lee ‘Scratch’ Perry experienced a bit of rare sales chart success when his recording of Susan Cadogan singing “Hurt So Good” scaled the UK pop charts. Trojan quickly released Perry’s Cadogan album (Susan Cadogan) to capitalize on the single’s popularity. Around this time, Perry also recorded an album by Candy McKenzie, a member of Full Experience along with Aura Lewis and Pamela Reed, who had also recorded for Perry. McKenzie’s set was never released, though a few songs trickled out including a dubbed-up version of “Long Enough” (aka “Walking in the Sun”) that surfaced on Pressure Sound’s recent Return of Sound System Scratch collection. Now Trojan has finally released a full album’s worth of McKenzie’s work with Perry.

If Super Eight is Scratch at his most ethereal, Lee ‘Scratch’ Perry presents Candy McKenzie is Scratch at his most restrained, as he attempted to duplicate the more mainstream appeal of Cadogan’s hit. Had the distribution deal with Island and Blackwell not gone by the boards around this time, this album might have been one of Perry’s most commercially successful efforts. McKenzie sings in a rich, soulful voice and Perry keeps the production effects to a minimum on this release. Call it reggae meets Motown. In any case, the album languished until this release. The backing musicians are pretty much the same aggregation of the Upsetters that appear on Super Eight, and again their playing is exemplary. Something of a stylistic departure for Perry, this album presents another side of the prolific producer’s oeuvre.

The set list includes:  Disco Fits ; Someone to Love Me ; Breakfast in Bed ; Walking in the Sun ; Jah Knows ; Ice Cream ; Sky at Night ; Keep Him Strong ; Tell Me a Lie ; When the Big Day.