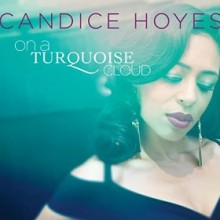 Title: On a Turquoise Cloud

Subtitled “Rare Ellington Songs for Soprano & Octet,” On a Turquoise Cloud features 13 songs penned primarily by Duke Ellington and Billy Strayhorn, culled by soprano Candice Hoyes after a year researching the Duke Ellington Collection at the Smithsonian Institution’s National Museum of American History Archives Center. Working with producer Ulysses Owens Jr., she was able to transform this research into a concept album that highlights some of the lesser-known (and many well-known)  songs in the Ellington oeuvre written specifically for sopranos such as Adelaide Hall, Alice Babs and Kay Davis. In fact, the title “On a Turquoise Cloud” references the wordless song written by Ellington specifically for Kay Davis, the classically trained coloratura who performed with the Ellington orchestra from 1944 to 1950.

Accompanying Hoyes is a world-class jazz band comprised of New York musicians, most of whom are affiliated with Wynton Marsalis and the Jazz at Lincoln Center Orchestra, including: Ted Nash, Ron Blake, and Carl Maraghi on woodwinds, Marcus Printup on trumpet, Vincent Gardner on trombone, Adam Birnbaum on piano, Yasushi Nakamura on bass, and Ulysses Owens Jr. on drums and percussion. Nash and Owens are also responsible for many of these terrific new arrangements, along with Wycliffe Gordon, Vincent Gardner, Kenny Rampton, and Adam Birnbaum.

Though Hoyes is classically trained and performs regularly in both classical and jazz genres, she sometimes fails to convince in songs that require a swinging jazz interpretation or gravelly mezzo (for example, “Blues I Love to Sing”), and her bending of notes occasionally lacks finesse. Hoyes is at her best in songs such as the title track and “Far Away Star,” which feature a high descant for which her voice is well-suited. Another highlight is “Almighty God” from Ellington’s Second Sacred Concert, in a fantastic arrangement by Gordon that begins with an extended trombone solo. Hoyes wrote lyrics for the popular instrumentals “Creole Love Call” and “Single Petal of a Rose” which work quite well, the latter featuring Joe Temperley, a former member of the Duke Ellington Orchestra, on bass clarinet. The album closes with Strayhorn’s “Thank You for Everything” in an arrangement by Nash which allows both Hoyes and pianist Adam Birnbaum to shine.

On a Turquoise Cloud features an outstanding band and wonderful new arrangements of these classic Ellington songs for soprano, which Candice Hoyes brings back to life with aplomb.