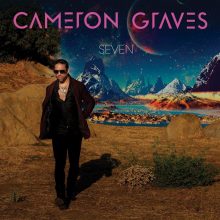 Pianist-composer Cameron Graves initially achieved acclaim as a member of the West Coast Get Down, a collective of L.A. jazz musicians that includes Kamasi Washington and Stephen “Thundercat” Bruner. More recently he has performed and recorded with fusion pioneer Stanley Clarke, who has served as a mentor to the younger musician. Releasing his widely acclaimed debut album Planetary Prince in 2017,Graves now returns with his own brand of progressive jazz on Seven. Referring to his new style as thrash-jazz, Graves draws upon his jazz and classical studies as well as his love of Living Colour, Meshuggah, and other heavy metal bands to create a stunningly inventive jazz-rock fusion that will blast you into another galaxy.

The album takes its title and inspiration from Graves’ penchant for writing in odd time signatures, particularly combinations of seven, as well as “the overwhelming presence and impact of seven throughout global spiritual traditions.” This exploration of spirituality in addition to Graves’ interests in astronomy and astrology are reflected in the titles of each track. Joining Graves on this journey are members of his core quartet: guitarist Colin Cook, bassist Max Gerl, and drummer Mike Mitchell.

Opening with “Sacred Spheres,” the mastery of the quartet is immediately apparent, with Graves and Mitchell competing in a furious rhythmic battle. Tenor saxophonist Kamasi Washington makes a guest appearance on the harmonious “Paradise Trinity,” taking the melodic line over Graves’ ostinato patterns, and returns on the more ethereal title track, “Seven.” Metal influences are apparent on tracks such as “Sons of Creation,” with its thundering keyboard pitted against guitar and percussion, and the clash of “Super Universes,” tempered only by occasional series of descending major chord progressions on piano. “Red” in particular is illustrative of Graves’ thrash-jazz, pitting the heavy metal influences against more elegant piano passages.

In a complete change of pace, “Fairytales” is a more classically oriented solo piano piece, in essence a deconstruction that illustrates the foundations of an album built upon Graves’ phenomenal technique. As he explains, “This project has two different characters. When you play these songs on solo piano, they sound just like a contemporary classical song, like Debussy or Ravel. But when you play them with the band, it turns into this hard-rock record.”  Closing with “Eternal Paradise,” Graves makes his vocal debut, a talent he comes by naturally as the son of soul singer Carl Graves. This song, however, is more of a hard rock anthem, with Cameron declaring “life is the eternal paradise.”

With Seven, Cameron Graves carries on the jazz-fusion traditions that were started by bands like Mahavishnu Orchestra, Weather Report and Return to Forever, but he reimagines and extends the genre into new territories.