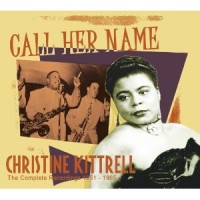 Christine Kittrell’s name is probably not the first that rolls off the tongue today when one is listing their favorite lady R&B singers, but hopefully this new Bear Family compilation will raise her profile to long-time acquaintances and introduce her to a new generation of fans.

Kittrell’s recording career spanned from the early 50’s to the late 60’s, plus some regional work in the Columbus Ohio area in her last years. She jumped from chitlin circuit soul to gospel and back again several times, and retired from performing and recording in 1969 after suffering a shrapnel wound during a USO performance in Vietnam.  Kittrell was then a social worker in Ohio and later returned to occasional performing and recording in the Columbus area before her death in 2001.

This long-format CD, which includes superb biographical and music notes plus a detailed discography, covers Kittrell’s soul and R&B output on a variety of labels from 1951 through 1965.  She tasted success early, performing and penning the 1952 regional hit “Sittin’ Here Drinking,” which sold over 100,000 copies according to Martin Hawkins’ booklet notes.  That hit, on the tiny Nashville-based Tennessee/Republic label, launched a series of tours and extended bookings which eventually took Kittrell to Chicago.  By 1961, she was on the Vee-Jay label, described by Hawkins as “the most successful black-owned label until Motown.”

Although most of the songs in this collection are from the Tennessee/Republic sessions, Kittrell really shines on the Vee-Jay sides and on a later King/Federal session that closes the CD.  Backed by better musicians in higher-grade studios, she creates an intense but soulful sound.  She cut a second version of “Sittin’ Here Drinking” for Vee-Jay.  Hawkins laments “the fact that Federal did not manage to turn … into a hit” the 1965 single of “Call His Name”/”Ain’t Never See So Much Rain Before.”  He’s right!  The songs are soul gold, and Kittrell’s delivery was never more on-the-mark.

The earlier Tennessee/Republic material chronicles Kittrell’s growth in the recording venue and also showcases the range of what she could sing successfully.  She was not just a soul queen, she could sing to a rhumba beat (“I Ain’t Nothin’ But A Fool,” the B-side to “Sittin’ Here Drinking”) and laid down plenty of straight blues.  In her live performances, she also mixed in gospel and jazz standards.

One minor quibble— Bear Family’s marketing material describes Kittrell as “a forgotten R&B legend” who is now “reborn” with the release of this new compilation.  A simple Google search indicates Kittrell’s work is well known, and someone maintains her MySpace page.  So she is not exactly “forgotten.”

That said, this compilation is highly recommended.  In its usual thorough fashion, Bear Family has included five unissued alternate takes from the Tennessee/Republic sessions and one unissued Vee-Jay song.  There’s also a little bit of studio chatter here and there, but none of it detracts from the power of the master takes and released singles.  Kittrell left a fine musical legacy and Bear Family has done her fans, old and new, a service by gathering all that music in one place with some really nice documentation to put it all in perspective.