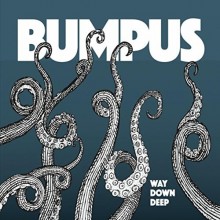 Veteran Chicago soul band Bumpus returned in a big way this March, with its first release since 2007.  The band was a funk tour de force in the 2000s, but faced some personnel changes in the early 2010s that sidelined new recording projects.  The group still has performed locally over the past few years, and the band’s new lineup and infectious live energy is effectively captured on its Way Down Deep EP.

Bumpus is perhaps most well-known for its killer, high-energy live show, with one of the region’s funkiest rhythm sections and a horn line to match.  However, Way Down Deep showcases the band’s vocalists, James Johnston, Ava Fain and Tina Howell, whose layered, soulful voices drive the 6-song set. The band’s bread and butter is tightly knit guitar-driven funk tunes like the self-assured “Step Sure or Step Aside,” a challenge to “suckas” that is propelled by an active bass groove and soulful Hammond organ.  The EP’s highlight is the 2-part “Way Down Deep.” Part 1 is a solid lovin’ song infused with horn hits and funky drumming, but the song’s bridge gradually morphs into the spaced-out P-Funk territory that characterizes Part 2, with phased out vocals and instruments as well as an extended What’s Going On – style saxophone solo over gradually fading backing vocals.

It is a great benefit to Chicago’s music scene that Bumpus is back and bumpin’. Hopefully, Way Down Deep will usher in another decade of solid grooves and soulful songwriting.