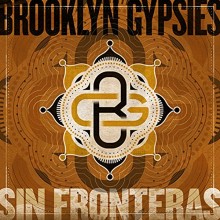 It’s not often that you hear a song described as a mix of “reggae blues and Russian inspired folk melodies,” but Brooklyn Gypsies isn’t like anything you’ve ever heard before. Formed in Brooklyn in 2012, this group truly represents world music, as the members represent five different countries (Spain, Japan, Russia, Italy, and the United States) and draw from the influence of many more. Their music is so hard to describe that even officially they call it “an infusion of Mediterranean, North African, Arabic themes with Electronic, Dancehall and Dub Reggae.” Somehow, Brooklyn Gypsies make all these traditions work together to create something new, something “without borders,” which is the Spanish translation of their debut album Sin Fronteras.

Despite the variety of influences, this album is connected by the band’s aim to take the listener on “a sci-fi desert journey through the Middle East and North African Sahara.” The trumpet and saxophone really emphasize this element through their Middle Eastern rifts that are easily recognizable as traditional gypsy music. But all the musicians lend a hand and have a multitude of talent. Individually, they have performed with a variety of artists such as Quincy Jones, Wax Poetic, the Roots, and Matisyahu.

The two women of the group, Tina Kristina and Carmen Estevez, have unique styles but are equally strong in their vocals. Tina sings on “Desert Moon,” which has the aforementioned inspirations from reggae, blues, and Russian folk melodies that she learned while playing in her family’s Russian/Indian gypsy band. In “Supercore,” Carmen Estevez takes the lead, demonstrating her flamenco freestyle skills in a song with an especially strong Middle Eastern theme woven throughout.

Many songs have a hip-hop and electronic feel to them, such as “Dream Snake,” which has a strong and heavy beat. “Zeina” also has a mind-blowing breakdown that takes you by surprise two minutes in, and transforms into a second, more alluring part of the track. There is also a strong EDM influence in the song “BK Gypsy Dancehall,” which features Bajah of Dry Eye Crew, the legendary hip-hop group from Sierra Leone.

Sin Fronteras is an impressive debut album, with excellent production, flawless musicianship, and a blend of many traditions and cultures. Each song takes its time and offers a new surprise, leaving the listener wanting more. Brooklyn Gypsies has shown that they have a lot to offer and hopefully they will continue bending and breaking musical boundaries as they create a new global sound.