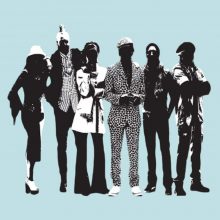 Brooklyn Funk Essentials may not be based in Brooklyn anymore, but they sure haven’t given up on the funk. Founded over twenty years ago by Lars “Lati” Kronlund, BFE and its lineup have gone through many shifts over the years. Just before forming the band, Lati released the club anthem “Where Love Lives” with Alison Limerick. Now, for the band’s latest album, the creative relationship between Lati and Alison has been rekindled—with the addition of four other musicians—and BFE has given new life to the projects the duo was working on in the 90s.

Called Stay Good, the album is named after a song that Kronlund had written and wanted Limerick to record vocals on. The collaboration didn’t materialize until 2016, when Limerick joined Brooklyn Funk Essentials and the idea finally came to fruition. Also on the album is an updated version of “Where Love Lives,” the track that brought them together to begin with. The track “Ain’t Nothing” features chanting in Patois from Jamaican guitarist Desmond Foster as well as lyrics by Iwan VanHetten that were inspired by neo-soul superstar Anderson .Paak. In fact, several tracks featured on the album carry the theme of staying true in changing times, whether as a band or as an individual in today’s rapidly changing socio-political times.

This fresh and funky album proves BFE can still produce an eclectic groove even after 25 years and a changed lineup. On Stay Good, Brooklyn Funk Essentials come together seamlessly, creating an album that’s a testament to the group’s ability to change, grow, and excel.