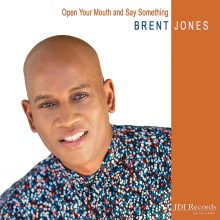 Brent Jones has created yet another amazing album with Open Your Mouth and Say Something, his second release on JDI Records and a great follow-up to Joy Comin’ (2014). This live project was produced by Professor James Roberson (president of JDI), Brent Jones, and the incredible maestro Eddie Brown (music director, keyboards). Musicians include Michel Bereal (organ), A.J. Brown (bass), Ryan Adams (drums), Kamil Rustam (electric guitar), Erick Walls (acoustic guitar), George Dum (percussion, mixing and mastering, editing) and Donald Hayes (arranger, live horns and strings). Jones, who is known for performing with his vocal group T.P. Mobb on albums such as Ultimate Weekend (2007,Tyscot) and Beautiful (2002, EMI), recorded his new project at the Victorious Life Church in Waco, Texas with the Waco Community Choir. The use of a full choir distinguishes Jones’ JDI releases from his earlier albums, as does the live production element, which allows people to feel like they are participants within the performance, instead of just listeners.

The album opens with Jones’ hit single and the album’s title track, “Open Your Mouth and Say Something,” which reached number 21 on the Billboard chart for gospel airplay. The funk-influenced groove gets listeners on their feet and prepared to praise God for the duration of the album. On this song Jones revisits the lyrics from the hymn “When I Think About the Goodness of Jesus,” which is often used as a testimony, both verbal and in song, in various African American church denominations. He explains, “When I think about what He has done for me…. I got to give it up in the form of both a physical and verbal praise! It’s OK to clap your and stomp your feet but… the best kind of praise is when you Open Your Mouth and Say Something! You got to give God the fruit of your lips.” The song follows in the wake of previous hits from Jones such as “He Rose,” “Goodtime,” and “Don’t Wait Till Midnight.”

The verbal praise continues in “Cry Holy,” an upbeat choir song with a sway that was originally released on Ultimate Weekend and inspired by Reginald Herber’s hymn, Holy Holy Holy. Jones describes “Cry Holy” as an “’80s gospel choir song that you have to do the Carlton to,” referring to the famous dance by Alfonso Ribeiro’s character Carlton Bank’s on the 90’s television show, Fresh Prince of Bel-Air.  At the end of the song, Jones explains that the “redeemed cry holy,” not because they are perfect—“redeemed means I once was lost but now I’m found,” referencing the hymn “Amazing Grace.” Jones goes on to say, “Even though I’m found” (meaning he has accepted Christ in his life and is now redeemed by his blood), “I still got some issues!”

“Midnight” was originally released on the album Beautiful, featuring Coko from the ‘90s R&B group SWV. This choir hit has been a Sunday morning favorite in churches for almost two decades. The new live version “Don’t Wait Till Midnight” adds a vamp featuring various soloists, and also treats us to a call and response improvisation between Jones and music director Eddie Brown. Those who love the song will rejoice in this live experience!

Open Your Mouth and Say Something is one of the best recent releases of live gospel music. Whether you are looking for something for your choir to perform on Sunday morning for the worship service, or just needing something nice to listen to for the car ride home, Brent Jones along with Thomas Brooks and the Waco Community Choir will leave you wishing there was more.