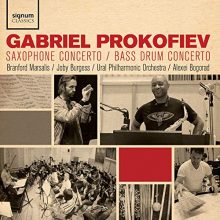 When Gabriel Prokofiev called Branford Marsalis to see if he had any thoughts on the new saxophone concerto he was about to compose, Branford had one request: “make it melodic.” So Prokofiev took it upon himself to write, as he says, “a classical concerto,” but one that combines his love of jazz with classical elements in a harmonious and syncretic way.

Branford Marsalis’s foray into classical music is nothing new. As a saxophonist, he is perhaps known best for his leadership of the Branford Marsalis quintet, but he is also a frequent soloist with leading symphony orchestras, including the Chicago Symphony Orchestra and the Boston Pops Orchestra. The internationally renowned musician maintains a diverse career as a composer, performer, and educator in both classical and jazz genres. A true genre bending musician, Marsalis also has collaborated with pop and rock artists such as Sting and the Grateful Dead.

Prokofiev’s unique compositional style is a well-suited match for Marsalis’s multi-genre capabilities. The British-born composer frequently melds classical music with jazz, hip hop, dance, and electronic music in his various works for orchestra, chamber ensembles, and film. Prokofiev has collaborated with numerous international orchestras, such as the BBC Philharmonic and Seattle Symphony, as well as dance companies. As a DJ and hip hop producer, he founded the night club and record label, Nonclassical. Of course, it is also worth mentioning that Gabriel is the grandson of the famous Russian composer Sergei Prokofiev.

Gabriel Prokofiev’s Saxophone Concerto was commissioned by Andrey Breyko, the Naples Philharmonic, and the Detroit Symphony Orchestra and was premiered by Marsalis with the Naples Philharmonic in 2016. The orchestra on this recording is the Ural Philharmonic Orchestra, one of Russia’s top orchestras and commissioner of new works. Prokofiev’s outstanding liner notes for this new album featuring his Saxophone Concerto and Bass Drum Concerto imbue the listener with a greater meaning of the works.

The Saxophone Concerto begins with a winding, slow first movement, “Largo con Tenerezza.” Opening with eerie strings, Marsalis enters on top with a singing saxophone vibrato that whirls into a technical passage with a driving bass drum. One can hear rhythms and chords reminiscent of Stravinsky’s Rite of Spring and high soaring saxophone altissimo notes before the movement builds into a percussive battle between saxophone and orchestra, pitting piercing piccolos against brass and strings that Prokofiev says is “alla hip-hop.” The second “Scherzo” movement begins with solo saxophone playing rhythmic arpeggios of an ambiguous tonality. No stranger to unusual sounds, Prokofiev treats the listener to an abrupt beeping bell sound, followed by an incredible sweeping sax cadenza by Marsalis making use of arpeggios in an improvisatory style reminiscent of Bach.

The next movement to follow, “Largo Mesto,” is dark and brooding. Opening with solo woodwind lines over strings, the movement gives way to a minor sax solo with wide leaps moving down to a low range and powerful vibrato. It then transitions into a waltz-like section, with Marsalis demonstrating an impressive display of altissimo control over the technical flurry of the orchestra. “Allegro Mechanico” has a “cute” beginning, but soon transforms into a percussive and mechanical driving force, growing with mallet percussion and trombone slides before launching into a brilliant technical passage that concludes the piece.

Throughout this concerto, Marsalis displays virtuosic talent while maintaining the utmost command of the instrument. With a style that’s free and spirited but also dark and powerful, he takes us from jazzy swing to contemporary classical music with hints of hip hop. The careful melodic interweaving of the alto saxophone with the orchestra is also a credit to the composer. Prokofiev’s Saxophone Concerto is an accomplished piece that is not simply a showcase for the saxophone, but also grows and breathes with the instrument to reach incredible moments.

Prokofiev’s equally impressive Bass Drum Concerto is the first piece ever written of its kind. Prokofiev was inspired to compose for the instrument to expose more audiences to its sonic possibilities and illustrate how the bass is prevalent in everyday popular music. He chose Joby Burgess, a prominent British percussionist involved in minimalist and electronic music styles, to perform the concerto. Burgess is a member of the audio visual collective Powerplant, and has also played percussion on many film and television scores including Black Panther and Ex Machina.

The Bass Drum Concerto begins with the slow movement “Lento Scuro” that Prokofiev dubbed “Bass War,” due in part to the bass drum’s un-dampened rolling pattern that evokes thunder. The orchestra enters with dark, low wind sounds before the “war” erupts with a blast of percussive effects complete with a drum groove that evokes a contemporary film score. Prokofiev continues to explore different possibilities for bass drum sonorities, which includes a slow “Largo Mesto” dissonant second movement with clicks on the drum rims and moans from the drum skin. Other notable aspects of the concerto include a “club music” third movement that employs a notable bass thud, transporting the listener to a techno music dance floor before switching to a conflicting swing and straight groove. The final movement, “Allegro Brilliante,” is a technical frenzy with swirling strings and winds over brass blasts, ending in a galloping sixteenth note melody and fast solo bass drum rolls.

Throughout the Bass Drum Concerto, Burgess shows incredible versatility and flexibility as a percussionist, captivating the listener with new sounds and grooves. From loud banging smacks to quiet clicks and whines, the audience and orchestra are challenged to reconsider any preconceived ideas about the bass drum sound. Prokofiev’s Bass Drum Concerto destroys the notion of the bass drum as an instrument with limitations, exploring the possibility of new concerto instruments and forms for the future.

This new album featuring Gabriel Prokofiev’s Saxophone Concerto and Bass Drum Concerto showcases the soloists and orchestra in a virtuosic display, as well as the composer’s stunning ability to blend genres of classical music, jazz, and hip hop into a pulsating and percussive energy sure to thrill any listener.