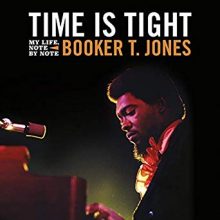 Anyone familiar with the history of Memphis music and Stax Records will be interested in this new memoir from keyboard wizard Booker T. Jones, who led the Stax house band Booker T. & the M.G.’s. In Time is Tight, Jones riffs on his six decades in the music business, taking us from his formative years in Memphis through his matriculation at Indiana University in the spring of 1962. Any IU alum will especially enjoy his memories of trombone studies under Buddy Baker, playing David Baker’s charts in the jazz band alongside Randy Brecker and Jamey Aebersold, performing with the Marching Hundred, meeting his first wife at Teter Quad cafeteria, living on his advance royalty payment from “Green Onions,” and his appreciation for the music of Bloomington’s most famous native son, Hoagy Carmichael.

With chapters are organized like stops along the highway, Booker travels between cities while jumping back and forth in time, in the same manner memories are most often revealed. Primarily focusing on his life during the ‘60s and ‘70s, including his eight years at Stax and touring with the M.G.’s, Booker also includes more recent events, such as performing for President Obama at the White House, but these later years primarily focus on family, love and loss. The soul of Booker T. Jones shines through the pages, revealing his modest yet determined personality, his intellectual curiosity, and of course his love of music. This is a book from the heart, in his own words, no ghostwriters necessary. 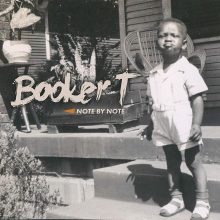 Promoted as a musical companion to Booker T.’s memoir, Note by Note covers many of his career highlights. The album opens with Carla and Rufus Thomas’s “Cause I Love You,” with Booker noting he played the original intro on a borrowed baritone sax. This version features Evvie McKinney and Joshua Ledet on vocals, two amazing young soul singers who rose to fame through television singing competitions. In his memoir, Booker recounts how, at the age of twelve, he played the piano accompaniment for Mahalia Jackson during a private performance of “Precious Lord” in Memphis. Switching to his beloved Hammond B3, Booker accompanies Sharlotte Gibson on this searing rendition of the Thomas A. Dorsey gem. Another B3 highlight is “Time Is Tight,” an update of the instrumental made famous by Booker T. & the M.G.’s in 1968. This time around, Booker performs the version “conceived in my fantasies and dreams,” an extended cut that gradually unfolds into a resplendent nine minute tour de force.

Ty Taylor, best known as lead singer of Vintage Trouble, nails the Otis Redding classic “These Arms of Mine” in an arrangement that sounds straight out of the Stax studio. Needless to say, Booker had to include a Hoagy Carmichael tune and chose “Stardust” as a nod to the Willie Nelson album he produced in 1978. Matt Berninger, frontman of the indie rock band The National, seems an odd choice as soloist for this demanding song, but manages to growl his way through in a manner reminiscent of Tom Waits. The album concludes with two tracks performed by Teddy Jones. Anyone who has attended a Booker T. concert in the last few years has witnessed the gradual maturation of his youngest son on vocals and guitar. Teddy leads us through two original songs penned by father and son—“Paralyzed” and “Maybe I Need Saving,” the latter a rock oriented showcase for Teddy on guitar.

Not only does Note by Note provide the musical accompaniment to the life of Booker T. Jones, it also provides an opportunity for many young singers to shine, including his son Teddy. Just as he has led so many musicians over the years, Booker T. is grooming a new generation to carry on the soul tradition, including his son, Teddy.