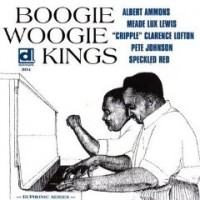 This CD is a course in Boogie Woogie Piano 101, much of it recorded in 1939 but parts recorded in 1955, 1960 and 1970.  Delmark founder and owner Bob Koester provides neat little biographical sketches of the artists in the brief liner notes. The music speaks for itself; it must since the notes don’t offer any details.

“So who doesn’t like Boogie Woogie?” Koester asks in his notes. It’s hard to think of anyone while listening to this collection. The 1939 recordings of Albert Ammons (stride piano pioneer and father of hard bop sax great Gene Ammons and Methodist Bishop Edsel Ammons), Meade Lux Lewis and Pete Johnson are classic Chicago-style warhorse piano gymnastics.  Especially amazing is Lewis’s “Doll House Boogie,” part of which was apparently pounded out on a toy piano! The CD tray card notes these are “famous 1939 Sherman Hotel (Chicago) recordings,” but does not explain the context so one wonders what is “famous” about this venue and these recordings.

Interesting and different are the circa 1939 recordings of “Cripple” Clarence Lofton.  Koester describes his style as the “Raggedy-Ass school of woogie,” meaning Lofton “never really hits a wrong note but slaps the keys in a way that you wonder how he does it.” The key to Lofton is how he keeps the beat together while running around the keyboard. It’s a nice contrast to the polished pyrotechnics of Lewis.

Delmark is in the process of reissuing titles from Paul Affeldt’s Euphonic Sounds label, and this CD is part of the series.  The recordings of Henry Brown and Speckled Red come from Affeldt’s master tapes. The performances are less polished than the 1939 recordings by the old masters, but there’s much to like about them.  Koester’s notes claim Speckled Red’s “Dirty Dozens” is “the great-grandfather of rap.”  It is a humorously foul-minded ditty, and apparently Red would extend the playing time and dirtiness of the lyrics (after asking the ladies to leave the room) when he played the song live.

A note about the sound quality: it’s not, by and large, high-fidelity. The 1939 performances are heard through the clouded lens of scratchy and sometimes distorted disc recordings. The field recordings made by Affeldt in the 1950s, ’60s and ’70s are of varying quality, sometimes quite good.  But none of this prevents the fine music from blasting through.  Listen carefully to what these men are doing to a piano with two hands and 10 fingers and the amazement will cancel out any complaints about the audio fidelity. Kudos from this reviewer to Affeldt and then Koester, for avoiding heavy use of EQ or noise-reduction gadgets. What you hear on this CD is more or less what was heard during playbacks at the recording sessions.

Overall, Boogie Woogie Kings is a great introduction to blues-based stride piano. The music is vaguely suggestive of a saloon, but have no doubt that these guys are master musicians, playing hard and fast. If you’re interested in further exploration, hunt down Albert Ammons’ 1940’s Mercury sides, Pete Johnson’s work with Joe Turner, Meade Lux Lewis’s sides reissued by Riverside in the 1950s, and further Delmark CDs in this Euphonic Sounds series.

Editor’s note:  Jimmy Blythe’s Messin’ Around Blues, a previous release in the Euphonic Sounds series, was reviewed in Black Grooves in 2007.