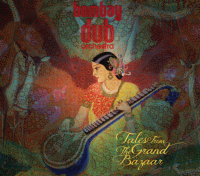 Title: Tales From the Grand Bazaar

The ambient, East-Meets-West mix of instrumentation and electronics has proven to be a potent formula for Bombay Dub Orchestra. Formed almost a decade ago, the band continues their success on their newest release, Tales From The Grand Bazaar. Bringing in musicians from across the globe— including India, Turkey, the United States, the UK and Jamaica—the years-long project has ultimately culminated into a solid, yet very creative techno-dub release.  With the addition of traditional Middle Eastern instrumentation, the trance-like feel put out by the electronic instrumentation is complimented by the likes of the ud and qanun. Coupled with the dark, heavy bass and drums by famous Jamaican session musicians Robbie Shakespeare and Sly Dunbar, the continuous groove at the outset blends into a ceaseless stream that blends into one, uninterruptible creation. From start to finish, Tales From the Grand Bazaar flirts with a host of unique sounds and instruments that blends the electronic with the traditional, and is effortlessly combined and mixed in such a way that is extremely listenable, and easily enjoyable.