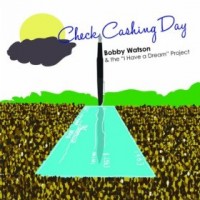 Artist: Bobby Watson & the “I Have a Dream” Project

Saxophonist Bobby Watson, a Distinguished Professor in Jazz Studies at UMKC, recently released his second album on his own Lafiya Music label. Whereas his last project was a celebration of hometown barbeque joints, this time around his focus is much more solemn and overtly political: the 50th anniversary of the March on Washington and Martin Luther King Jr.’s “I Have a Dream” speech. The album title references Dr. King’s goals for the march: “to cash a 100-year-old check, a moral check that the founding fathers wrote in the Declaration of Independence but, to this day, is still marked “insufficient funds.” Watson reflects upon the 50 years since the march—“where we’ve been, where we are, and where we need to go as a people, as a country, and as a global community”—through his music.

This concept album coalesces around the poetry of Glenn North, a local spoken word artist Watson enlisted to write text to accompany compositions he originally conceived as political statements: the title track “Check Cashing Day,” the affirmative “Black is Back,” “Forty Acres and a Mule,” the brooding “Dark Days” about dreams deferred, and “My Song” reflecting on civil rights era brutality and injustice over a punishing rhythm by drummer Eric Kennedy.  The results are extremely effective, especially since Watson wisely intersperses the potent poetry with instrumental tracks, allowing an opportunity for greater reflection while also enhancing the musical experience with Watson’s signature hard bop. Pianist Richard Johnson shines on the solo interlude “Black Is Back (Reprise), while trumpeter Hermon Mehari and Watson exchange leads on “At the Crossroads” and flutist Horace Washington opens “A Blues of Hope” with a flurry of notes in his uplifting solo.

Other members of the band have also contributed some fine compositions.  “Seekers of the Sun,” which begins with a riff on “We Shall Overcome,” is expressively sung by composer/soprano Pamela Baskin-Watson (Bobby’s wife and frequent collaborator), whose vocals are juxtaposed with a brief spoken interlude by North. “MLK on Jazz (Love Transformed),” by bass player Curtis Lundy, draws from texts of an address by Dr. King at the 1964 Berlin Jazz Festival that celebrated the African American roots of jazz and its transformative power. Lundy’s ode to jazz continues on one of the album’s highlights, “Revival (Ovedia).”  While Watson’s sonorous sax evokes the wee hours at a smoke filled club during the heyday of Kansas City jazz, North provides a poetical interpretation of the city’s legendary history: “ever since this magical music emerged from space and time, it has found a permanent residence on 9+9 and Vine . . . where jazz is served up as an essential delight, and it smells like grandmother’s chitlins cause she always cooks them just right . . . jazz like matter can’t be destroyed, it only changes form, and the historic intersection of 18th and Vine is where jazz will be reborn . . . then we will cherish this noble noise . . . and glow in the cool of its heat, as the caramel coated cacophony provides a sonically hypnotic beat that can only ever be heard through the tapping soles of the feet, and as willing slaves to the rhythm, our freedom will be complete.”  The album ends on a spiritual note with an intimate arrangement of Ellington’s “Come Sunday,” sung by Baskin-Watkins that concludes with the lyrics “God of love, please look down and see my people through.”

In the liner notes Watson states, “I know that Dr. King’s dream has not been fully realized. However, the movement is not over. . . It is my hope that this recording provokes positive conversation and a movement towards Dr. King’s Dream.” On Check Cashing Day, Watson demonstrates just how much our shared history has been strengthened through music. Without a doubt this provocative and expertly performed album will make a lasting impression and contribute to the national dialogue about justice and equality.