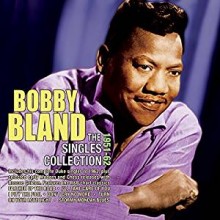 The great Bobby “Blue” Bland was one of the most influential and beloved vocalists of the post-WWII era. A product of Memphis’ Beale Street blues scene, Bland was known for his powerful, soulful voice and preaching style of delivery. His distinctive sound melded the blues with R&B and gospel music, which evolved into soul just about the time Stax Records opened for business in his hometown. This two-disc retrospective from Acrobat documents the first decade of Bland’s career, from 1951-62, including all of his “rocking R&B and soulful blues” sides on the Duke label. Also included on Disc 1 are a few of the singles he cut for Chess and Modern the year prior to signing with Duke, including the lesser known song “Letter From a Trench in Korea.” But there are plenty of hits as well, such as his 1957 break-out single “Farther On Up the  Road,” his “Little Boy Blue” from 1958 (said to have been influenced by the preaching style of Rev. C.L. Franklin), and the Brook Benton ballad “I’ll Take Care of You.” By Disc 2, Bland’s style firmly enters soul territory, with tortured ballads such as “Cry, Cry, Cry” and “That’s the Way Love Is.”

The tracks on this set are arranged in chronological order, accompanied by a 15 page booklet with liner notes by Paul Watts and discographical information.