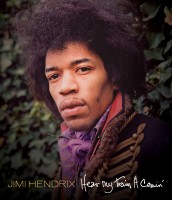 The new installment of PBS’s American Masters series—Jimi Hendrix: Hear My Train a Comin’—is a fascinating exploration of the life and music of Jimi Hendrix.  Director Bob Smeaton presents a well-rounded look at Hendrix, tracing important personal and musical moments in the artist’s life.  Smeaton avoids many of the usual tropes of documentary work about the lives of iconic rock stars, focusing not upon Hendrix’s drug use or the greatness of his recorded output, but instead highlighting how significant life events affected Hendrix’s musical output.  He presents a chronological narrative of Hendrix’s life, devoting an appropriate amount of time to his formative years, early career, and rapid rise to stardom.  A particularly strong aspect of the documentary is its focus on Hendrix’s creative process, emphasizing his obsession with producing high-quality work, culminating in the construction of his Electric Lady Studios in New York City.

Hear My Train a Comin’ presents a well-rounded narrative through its extensive use of interviews with the people who knew Hendrix best.  On camera interviewees include members of the Hendrix family, close friends, musical collaborators, and fellow rock stars from the 1960s, each offering his or her own unique perspective on the man and his relationship to his music (some excerpted from previous films).  While the filmmakers do choose to include the perspectives of rock journalists and critics, they avoid presenting the critic’s voice as the definitive statement on Hendrix’s life and work, focusing instead on the perspectives of those who knew him throughout his life.  The film also provides a strong analysis of Hendrix’s music by featuring interviews with in-studio collaborators, including track-by-track break downs of some of Hendrix’s master tapes, as well as a fascinating look at Hendrix’s studio work through the isolation of particular instrumental and vocal tracks.  Additionally, it incorporates a variety of footage from live performances, including previously unreleased footage from Hendrix’s performance at the 1968 Miami Pop Festival.

Hear My Train a Comin’ lives up to the high standards established by other entries in the American Masters series.  By providing a concise overview of the guitarist’s life and music, this documentary would serve as an excellent introduction to Hendrix for those unfamiliar with his career, while it’s also chock full of interviews, performance footage, and rare insight about Hendrix’s creative process that will delight long-time fans alike.  While the film is available as a free stream on the PBS website, the DVD release contains hours of unreleased performances, including footage from the Miami and New York Pop Festivals.  Hear My Train a Comin’ is an excellent addition to the body of biographical work about Hendrix’s life.