The known number of African Americans playing country music prior to Charley Pride’s emergence in the mid 1960s is small. Most famous would be harpist Deford Bailey, founding member of the Grand Ole Opry, then maybe the Louis Armstrong-backed Jimmie Rodgers sessions, and there were of course several integrated string bands recording in the 1920s. But how many were vocalists? And how many were sharing a microphone while singing close harmony brother-style duets with a white man?

German reissue specialists Bear Family Records presents us with at least one: Allerton and Alton, known as the Cumberland Ridge Runners, performed in the Portland, ME area in the late 1940s and early 1950s until the Korean War called them both men into duty. Though no formal recordings were ever made for any label, several radio shows, demos, and home recordings were preserved and Bear Family has now released them to the public for the first time ever. In typical Bear Family style, the CD is nearly 80 minutes long and the booklet and liner notes are well written and lavishly illustrated. The story of how these men met, the nonchalant way in which they addressed the race issue, and how the segregated army forever changed their lives is a fascinating snapshot of mid-century American culture, the roots of bluegrass music, the devastating effects of war, and the power of music to transcend racial stereotypes and prejudices.

Consisting of three 15-minute radio programs, complete with introductions and banter between songs, the CD features the two Al’s carrying on the country music brother duet tradition (i.e. the Monroe Brothers, the Blue Sky Boys, Bailes Brothers, etc.) while hamming up their put-on southern accents.  The radio announcer introduces their style of music as “hillbilly and folk music with mandolin and guitar.” Allerton himself calls their music “old-time picking and singing.” Liner notes author Hank Davis describes their style as “mountain music,” or “the roots of bluegrass.” However it is worded, the listener is treated to close harmony duet singing, blistering mandolin solos at break-neck speed, and Charlie Monroe-styled guitar runs on the acoustic guitar. Though the CD may garner much attention as the first issued recordings of country music’s first interracial duo, or even possibly as a prime example of 1940s and ‘50s hillbilly music from the Northeast, the music is flat-out entertaining for all country music fans and a special treat for anybody who enjoyed listening to the old-fashioned barn dance radio shows popular on WSM, WWVA, WLS, and the like.

Following is the promotional video: 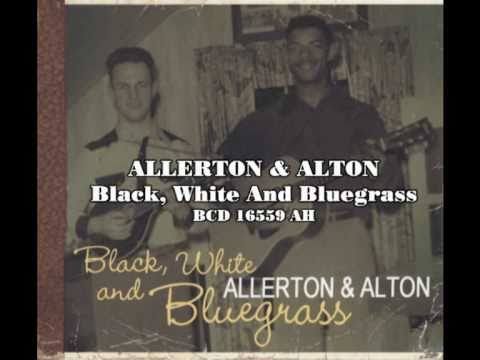 The liner notes benefit from extensive interviews with Al Hawkes (Allerton), who preserved the photos and recordings, as well as the family of Alton Meyers. Hawkes went on to found Event Records (recording a legacy of Northeast bluegrass, rockabilly, and country music) and has been acknowledged by several organizations as a pioneer in the bluegrass genre. This CD brings long-awaited attention to the early bluegrass contributions of Alton Meyers and adds yet another chapter to Hawkes’ legacy. Highly recommended!