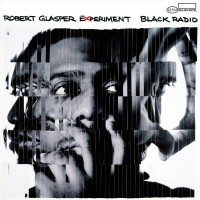 Jazz pianist Robert Glasper’s fourth album, Black Radio, is a notable departure from his previous works. Glasper’s new approach, which combines the styles of jazz, R&B, rock, neo-soul and hip hop, is an effort to re-imagine what might (or “should”) be played on black radio stations. In doing so, Glasper seeks to set a standard or at least start a discussion about “standards” in music today (or more precisely, African American music). He addresses these feelings at the end of the song “Gonna Be Alright” (featuring Ledisi), where he and others have a discussion about how the bar for music has disappeared and popular music has become “whack.” One person in the discussion suggests that the lack of standards happened because people “don’t really think much anymore,” and the fault lies with the people in charge of the music (radio and TV producers, record company execs, etc.) having an  “anything goes” mindset. He ends the song by saying, “The best thing you can do for people is just be honest, we got to do something, man.”

In an effort to create such a heavy experiment, Glasper features a wide range of guest artists including Erykah Badu, Yasiin Bey (formerly Mos Def), Lupe Fiasco, Lalah Hathaway, Chrisette Michele, Musiq Soulchild, and many more who add to his musical genius. These artists fit the project well—their differing backgrounds bring to the project a variety of musical styles, contributing to the authentic sound that Glasper is trying to achieve, devoid of artificial boundaries.

One of the most popular songs from the album is “Always Shine,” featuring Lupe Fiasco and Bilal, which fuses hip hop with jazz.  Another stand out track is the cover to the old Cuban jazz standard “Afro Blue” featuring Erykah Badu, who brings in the neo-soul feeling that she’s known for on her own recordings.

Following is the official trailer for the album:

Overall, Glasper’s album is innovative in its attempt to get back to a place and time when there was a standard for music on the radio and in all other forms of media. If there’s actually such a standard in music today, Glasper has certainly set the bar high with Black Radio.