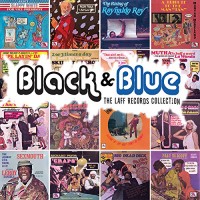 Most known for their raunchy comedy discs, Laff Records was an independent West Coast record label that started in the late 1960s and produced comedians such as Skillet & Leroy, LaWanda Page, and Wildman Steve. When the first successful label for black comedians, Dooto Records, began declining in the mid-1960s, it allowed Laff Records to pick up many of their party records and popular acts, such as Redd Foxx.  Though Laff Records closed in the mid-1980s, with their last hit being Kip Addotta’s “Wet Dream,” their legacy lived on through their records and the success of their artists, both in comedy and on television.

Black & Blue: The Laff Records Collection is a compilation of work from the label’s most famous and successful comedians, from LaWanda Page to Jimmy Lynch. The set was produced by comedian and actor Darryl Littleton, also known as D’Militant, who offers extensive liner notes that provide the history of Laff Records. Speaking of his own experiences growing up, Littleton says that “modern comedy owes its due to Laff Records…Had it not been for the pioneering efforts of Laff Records, it’s doubtful there’d have been a Def Comedy Jam or BET Comic View.”

The first disc starts with the 1972 release Back Door Daddy by Skillet, Leroy and LaWanda, an uncensored set that mainstream critics at the time called a “30 minute ultra-raunch session.” The original LP was hugely successful, and it marks an upswing in LaWanda Page’s career—she starred as Aunt Esther on the hit television show Sanford and Son the same year. She soon became known as the “Queen of Comedy” among party record circles, and disc one goes on to feature her 1973 Pipe Layin’ Dan—a classic, especially for lovers of blue comedy.

Next featured is Jimmy Thompson, a nightclub comic most well-known for King Monkey. The compilation features his slightly later album Jo-Jo Gun, which is full of rhymes and clever riddles. The first disc closes with Slappy White, former partner of Redd Foxx. Elect Slappy White VP is a politically-charged record released after White performed with Steve Rossi for President Richard Nixon at the White House in 1969.

The second disc features Dap Sugar Willie, Jimmy Lynch, and Wildman Steve. Dap Sugar Willie was best known for his role as Lenny in the sitcom Good Times, but the 1973 LP Ghost of Davy Crockett showcases his true talent on the standup stage. Jimmy Lynch’s bum persona “Funky Tramp” made him a party record star, and his work featured in this compilation includes his usual sketches that unabashedly talk about race. The second disc wraps up with Wildman Steve’s “Eatin’ Ain’t Cheatin.”

Mantan Moreland, better known as Birmingham Brown in the 1940 Charlie Chan detective films, opens disc three with his “Tribute to the Man ‘Tan,’” followed by Reynaldo Rey, who started his comedy career touring with the O’Jays. Part three ends with a diverse selection from Leroy Daniels, one half of Skillet & Leroy, featuring sketches that range in topic from sexual encounters to a preacher with a bad habit of stealing.

The final disc features one of Laff Record’s most famous comedians, Redd Foxx, and his nightclub act from 1978, “I Ain’t Lied Yet.” His sketches typically have either sexual or racial themes, though he also provides some clever definitions, such as “frustration: finding out for the first time that you can’t do it the second time.”

The last comedian featured is Marsha Warfield, a Chicago native who’s 1981 LP was recorded by Laff Records as a single track set that features a variety of topics, from church gossipers to the weaknesses of men. Warfield went on to become well-known for her role as Roz, a bailiff on NBC’s Night Court, and even had her own talk show for ten months.

Though these tracks have been featured on individual albums, Black & Blue: The Laff Records Collection is the first compilation of this sort. It’s a great collection of party records which have historical significance and represent an important era of blue comedy by black comedians.