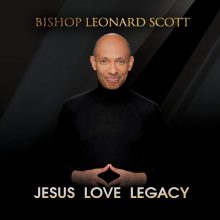 Scott was inspired to create the album after facing medical complications. On Easter Sunday, he collapsed in the pulpit after not being able to see or speak the words from his Bible. The paramedics were called and he was rushed to the hospital, but thankfully a series of tests revealed no health problems. “After they released me, I asked the Lord what that incident was all about,” Scott said. “I was concerned that I might pass out again while driving or doing something else that could have detrimental consequences…. That is when God spoke two words to me that were life changing. He said, “Trust Me.” I know I had read it numerous times in the scriptures, quoted it, proclaimed and preached it, but it had another significance when He spoke it into my spirit. It took my faith in God to another level. And that is what my new album, Jesus Love Legacy, is all about. It is songs about faith and trust in God.”

The upbeat, hit song on the album, “Working in My Favor,” ushers in the spirit of praise while also encouraging the listener to understand that no matter where life may have you, things will work out if you have faith and believe in God. This song is led by Fred Hammond and Shirley Murdock along with Jeral V. Gray & New Direction Choir.

“Power in the Name,” another praise and worship favorite on the album, is a declaration that saying the name of Jesus alone can bring “…peace, love and joy.” The song features the great Rance Allen, who is also an artist on the Tyscot label, and Kevin Vasser. Allen and Vasser go further by claiming that this song is for the “broken, those expiring heartache, pain, loneliness, insecurity.” Writers Feaster and Joy, along with vocalist Allen and Vasser, aim to prove that the result of accepting Jesus is the answer to your problems, and simply “calling on his name” can bring you peace, healing and rest.

“Trust and Obey,” a hymn written by John H. Sammis in 1887, was birthed out of the testimony of a congregation member during a church meeting, according to composer Daniel B. Towner. Bishop Scott approaches the song in a traditional gospel style, saying in the intro that it’s an old song they used to sing in Sunday school. The song in many ways embodies Scott’s testimony: where God spoke to him and said “Trust Me,” Scott responds, “To be happy in Jesus, trust and obey.” For Scott, trusting and obeying Jesus gave him a feeling of being whole again after a season of brokenness.

Jesus Love Legacy concludes with the track “It Is So.” During the middle of the song, Scott speaks about the album as a memorial of Jesus’s love. Scott also revisits many of the songs from the album through prayer as the accompanist, Phillip Feaster, plays lightly, sometimes referencing the songs being mentioned. This track brings the entire album to a conclusion by showing how each song works in tandem as evidence that peace, joy and love can be obtained through having faith and trust in Jesus, which is his legacy.