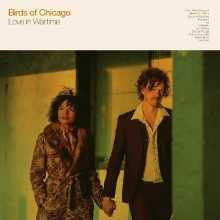 Americana duo Birds of Chicago is a marriage, literally, of singer-songwriters JT Nero and Allison Russell. Formed in 2012, the group has developed a loyal following through their relentless touring schedule. Since their last full-length project, Real Midnight (2016), the Birds have flown from Chicago to Nashville, where they now reside. Their new album, Love in Wartime, co-produced by Luther Dickenson, reflects the sounds of both hometowns as the duo artfully intertwines elements of country, folk, blues and rock.

While Russell’s voice has been prominent on previous albums, Love in Wartime is perhaps more evenly divided between the duo, contrasting Russell’s silky, soulful soprano against Nero’s grittier baritone.  Opening with the intro “Now/Sunlight,” Russell hums a whimsical, folksy tune over plucked banjo chords, then segues into the uptempo roots rock song, “Never Go Back,” with Nero on lead vocals. On the title track, twangy guitars come to the fore as Nero recounts the realities of longterm relationships and parenthood, “we sat there and tried to remember our dreams, no such luck, no such luck.” Life on the road is the subject of the poignant “Travelers,” as Russell sings “there’s no home in this world, got no home in this world.” One of the most effective duets on the album is “Try,” with Russell and Nero trading verses before coming together on the chorus, “Try a little harder, give a little more.”

Love in Wartime is jam-packed with carefully crafted songs and inspirational lyrics that celebrate life and love despite troubled times and the daily grind.