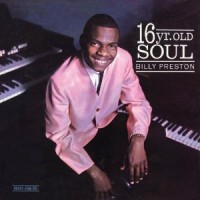 Fans of Billy Preston will relish this glimpse into the formative years of the child prodigy. The “gospel-steeped organ whiz” made his debut album 16-Yr. Old Soul in 1963 for Sam Cooke’s Derby label (a SAR subsidiary). Cut while Preston was attending high school in Los Angeles, the instrumental album was aimed for the jazz crowd and followers of Hammond B3 masters such as Jimmy Smith, Brother Jack McDuff and Booker T. Jones. The sessions were backed by a pair of elite combos, the first including guitarist Tommy Tedeso, bassist Clifford Hils, and drummer Milt Turner, and the second featuring Earl Palmer on drums, guitarist Gene Edwards, and Hils on bass. The mix of covers and original material includes a rocking version of the Ray Charles hit “I Can’t Stop Loving You,” a sanctified organ version of Cooke’s gospel hit “Bring It On Home To Me” and Billie Holiday’s “God Bless the Child.”  Thanks to Real Gone Music, this album is once again in print, with liner notes by Bill Dahl and a pair of previously unreleased instrumentals.