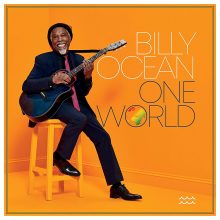 Ocean stated in a recent interview: “One World… [is] like a landmark for my 70th birthday! I feel this album reflects my maturity, and the many genres of music I’ve been exposed to—coming from the Caribbean as a little boy influenced by calypso music, to growing up in the East End of London, where music was so wonderfully diverse.”  Having co-written all 12 tracks on the album, Ocean draws from his diverse set of influences, which come together to offer feelings of hope and joy. “We Gotta Find Love” is a prime example, described as “an anthem of positivity and inclusivity” that is particularly relevant in the era of the Black Lives Matter movement. This message continues on in songs like “Love You More,” “Feel the World,” and the title track “One World.” The reggae-tinged “All of the World” is one of the album’s highlights, as Ocean is joined by a children’s chorus singing together for unity across the world.

Billy Ocean’s One World is a project filled with sentiment and emotion that resonates strongly during this discordant year. As Billy states, “The album reflects my thoughts, and the way that I feel at 70 years old, but most of all, I hope that it will make people stop and think about life and its meaning.”