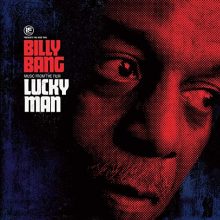 Forty years after the end of the Vietnam War, jazz violinist and Vietnam veteran Billy Bang bravely returned to the country in 2008 to find some closure for his still lingering trauma. This time armed with a violin instead of a rifle, Bang was followed by documentary filmmakers as he embarked on a deeply personal and musical journey that led him to collaborate with musicians throughout the country. The resultant film and album, Lucky Man, marks the third in a trilogy of works by Bang that confronted his past and explored the musical traditions of Vietnam.

Billy Bang was only 18 years old when he was drafted and sent to Vietnam, a tour of duty that would forever change his life. On his return to the States, Bang fell into alcohol and drugs to cope with the guilt and trauma but, on a trip to a pawnshop to buy guns, he instead picked up a $25 violin that began his musical journey of healing. The album Lucky Man is a poignant compilation of live recordings from Bang’s travels throughout Vietnam interspersed with his candid thoughts about music, art, war, and his return to the country. Bang’s immense talent for improvisation and collaboration shines through in the recordings with Vietnamese musicians such as saxophonist Trần Mạnh Tuấn, the Phu Dong Family Band, and the Banhar Gong Group of Kuntum. The album climaxes with his collaboration with the Hanoi Symphony Orchestra on “Mystery of the Mekong.”

Between the striking musical compositions and emotional reflections on life and humanity, Lucky Man is a bittersweet experience that will immerse any listener, and a wonderful tribute to Billy Bang, who died three years after this journey to Vietnam.