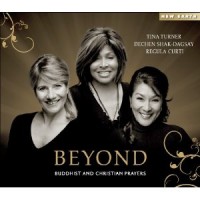 –
This holiday season Tina Turner has presented us with a spiritual offering.  Raised in the Baptist faith, Turner was first introduced to Buddhism in the early 1970s. Three years later she converted and has since become one of the most high-profile practitioners of Nichiren Buddhism, a Japanese branch of the religion which focuses on building a better and more peaceful world.  Her new album, Beyond, “explores the oneness of religions through music with Buddhist and Christian prayers.”

Collaborating with Turner on the album are Dechen Shak-Dagsay (a native of Tibet and daughter of the spiritual leader Dagsay Rinpoche), who composed the music for the Buddhist prayers, and Regula Curti, who contributed original compositions for Christian prayers. Readings and chants are provided by Turner, who leaves the singing to her two collaborators.

In the official press release, Turner provides a fuller description of the project.  “I’m very happy to be a part of the BEYOND Project that was initiated by Regula Curti and Dechen Shak-Dagsay, both amazing singers, individuals and philanthropists from two different cultures—Christian and Tibetan. This project has taken on a life of its own and has expanded and attracted other artists of various faiths who will be involved with us in subsequent albums as this continues to grow. As a collaborator I’d like to make very clear that the Project is not about me or Tina Turner the rock star. It’s about being part of and supporting a movement for the awareness and acceptance of different religions and spiritual paths to awaken the truth of ultimate oneness within us all. This is a movement that goes beyond the three of us and has already been embraced by many people, including the Dalai Lama, the Abbott Martin Werlen Osb, and Deepak Chopra. The BEYOND Project is an invitation to open up a space where it is possible to include each individual to contribute to this vision. We are all the same, looking to find our way back to the source.”

In addition to the timely spiritual messages, the beautiful, meditative songs and music provide a welcome respite from the stress of everyday life and will surely help listeners achieve inner peace. Furthermore,  all artist proceeds from the recording will go towards supporting their own non-profit organizations that focus on the welfare of children: The Dewa Che Foundation, The Seeschau Foundation and The Tina Foundation.