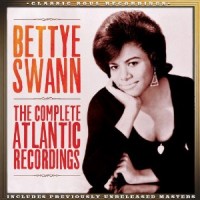 Today, soul singer Bettye Swann is probably best remembered for Joss Stone’s cover of Swann’s first (and highest-charting) Atlantic single, “Victim of a Foolish Heart,” or, possibly, for being confused with Brenda Holloway by one of the characters in George Pelecanos’ crime novel The Night Gardener.  But with the release of Real Gone’s The Complete Atlantic Recordings, this gifted if obscure singer is now remarkably well represented on CD.   In 2001, Kent Soul reissued Swann’s earliest recordings, made for Money Records between 1965-67, and Honest Jon’s Records reissued her 1968-70 Capitol sides three years later.  With the addition of the new compilation, featuring Swann’s last recordings made between 1972-76 for Atlantic, virtually her entire catalog is now available.

Swann’s story is deftly told in Charles Waring’s liner notes.  After some initial chart success, she bounced from the Money label to Capitol—where she recorded for the first time in the “country-soul” vein being popularized by Ray Charles, Esther Phillips, and Solomon Burke—before landing with Atlantic, whose top-notch production values and deep stock of tunes seemed to augur great things for the nimble-voiced singer.

The music here is indeed uniformly fine, with top-notch, if occasionally overdone, production values and professional musicianship.  But relatively few of the songs were true stand outs, something Atlantic seemed to realize as well since they released only seven singles and no full-length albums during her tenure with them.  These 14 sides, along with both sides of her sole Big Tree Records single (which Atlantic distributed), two tracks previously released only on CD compilations, and five unreleased masters, are all gathered here in this welcome 23-track compilation.

Atlantic was unsure how to promote Swann.  While she had an expressive and even luxurious voice, she was not an over-the-top emoter and she did not display any flashy virtuosity.  Like Capitol, Atlantic tried her in a number of settings: standard soul backings with punchy horns (such as “The Jealous Kind,” a terrific previously unreleased song with a relaxed, understated vocal), country-soul remakes of songs by Tammy Wynette (“Till I Get It Right,” another of the best tracks here) and Merle Haggard (“Today I Started Loving You Again“), funkier numbers with string backings in a Philly soul vein (a somewhat plodding “The Boy Next Door” and its flip, the much superior “Kiss My Love Goodbye,” both from her fourth Atlantic single), and even a reggae-tinged track (the excellent “Doin’ For the One I Love”).  None of these efforts garnered the big hit she needed to take her career to the next level.  After her Atlantic contract ran out, Swann left the music business and essentially disappeared until reporter Jarret Keene in 2005 tracked her down living near Las Vegas.

While not every “rediscovered” soul singer has a late second-act starring career à la Bettye LaVette or Lee Fields, Bettye Swann’s music deserves to be heard.  The Atlantic music machine was nothing if not relentlessly professional, and there are enough gems in this collection to make this reissue of enduring interest to soul fans looking to explore the byways of American soul singing in the 1970s.