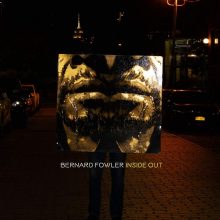 Bernard Fowler has had an impressive career for being someone whose name flies under the radar of the average mainstream listener. He has recorded with composers such as Philip Glass, jazz legend Herbie Hancock, and rock icon Alice Cooper. Inside Out, Fowler’s newest release, presents a unique interpretation of the music of the Rolling Stones that will sound fresh and new to even the most seasoned Rolling Stones fan. As a performer, Fowler has worked as a backup singer and percussionist for the Rolling Stones both live and in the studio since 1988, so he is very familiar with the band’s style. Yet these tracks are more than just arrangements of Rolling Stones songs that he has performed—they are new musical compositions on top of which Fowler interprets the lyrics in a spoken-word format in the style of Last Poets and Gil Scot-Heron. Fowler’s approach to the vocals allows the listener to hear the lyrics in a raw, more up-front setting for perhaps the first time. It is striking what stripping lyrics from their original foundation can do to the listener’s perception of them. As for the music that is backing these lyrics, it is played by first-rate musicians. Darryl Jones, who has played with the Rolling Stones since the early ‘90s, plays bass on this album. Also present is renowned drummer Steve Jordan, who has played with many artists including the Blues Brothers and John Mayer. Even more fitting, he has also played on three solo records by Keith Richards.

One thing that stands out about this album, aside from its avant-garde approach, is song selection. For the most part, Fowler has avoided major Rolling Stones hits. “Sympathy for the Devil,” “Sister Morphine,” and “Time Waits For No One” are the most recognizable tracks, but many of the songs will be unfamiliar to casual listeners of the Rolling Stones. With the bonus track there are two versions of “Dancing with Mr. D,” a song from Goats Head Soup (1973) that is an underground favorite of diehard Stones fans. The two versions provide completely different interpretations of the same song—one version is funky, and the other consists merely of percussion. “Tie You Up,” “All the Way Down,” “Must Be Hell,” and “Undercover of the Night” come from Undercover (1983), an album often considered a disappointment for breaking a streak of Stones’ albums topping the charts. Consequently, these songs might be unfamiliar to a fair number of listeners.

“Sister Morphine” is the highlight of this album. The background music has a free jazz-rock feel as if it could have been on Miles Davis’s Bitches Brew (1970). Keyon Harrold’s trumpet is reminiscent of Miles, which comes as no surprise since he is responsible for all the trumpet playing in the Miles Davis biopic Miles Ahead. Behind his trumpet, a strong, hypnotic foundation is laid down by the keyboard, bass, and guitars. “Time Waits for No One” is representative of its title in that it feels like it is constantly driving forward. Backing vocals chanting “tick tock” add a dramatic touch. “Must Be Hell” is another interesting track with a sparse texture consisting only of percussion, saxophone, and Fowler’s spoken word. “Sympathy for the Devil” is the track most similar to the original Stones version in that the piano sketches the original song’s chord progression throughout. Additionally, the signature “whoo, whoo” is present.

One could hypothesize that albums of cover songs are generally for fans of the band being covered. However, Inside Out differs in this regard. Rolling Stones fans might be intrigued by some of the versions of these songs, but this album can also appeal to listeners not well-versed in the music of the Stones. These songs, stripped of their harmonic and melodic content and reenvisioned with new music and spoken words, become completely new entities. Inside Out is a worthwhile listen for any music lover.