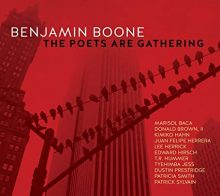 Composer-saxophonist Benjamin Boone continues his fascination with poetry and jazz on his latest album, The Poets Are Gathering. The Cal State University Fresno professor, who has released two previous collections devoted to this pairing, notes that jazz and poetry have been inextricably linked since the Harlem Renaissance. Following the tradition of artists such as Langston Hughes and Charles Mingus, who collaborated on the album Weary Blues (1958), Boone’s new project features eleven acclaimed poets—including Black poets Tyehimba Jess, Patrick Sylvain, Patricia Smith, and Donald Brown, II—who narrate their own works. Boone, who performs on soprano and alto sax, leads the various backing ensembles, featuring contributions from guitarist Ben Monder, pianist Kenny Werner, bassist Corcoran Holt, and drummer Ari Hoenig. Recorded over the last three years, the content reflects the political and social turmoil of the present, providing “up-to-the minute, ripped-from-the-headlines” messages.

The album opens with distinguished poet Patricia Smith’s fierce reading of her graphic poem, “That’s My Son There,” reflecting the anguish of Black mothers whose sons and daughters were “shot as prey / shot as solution / shot as conquest / shot as lesson / shot as warning…” Boone’s searing sax solo wrings every drop of emotion from Smith’s words, forcing listeners to face these harsh realities. In a change of pace, Smith’s “Your Man,” set to a bluesy piano accompaniment performed by David Aus, is a sensual journey through a Thursday night hookup between a man and his unapologetic mistress.

Haitian-born poet and educator Patrick Sylvain reflects on his country’s history in “Marooning,” from the African diaspora to contemporary conditions that spur desperate attempts to make the treacherous journey across the ocean to Florida. Set to music evocative of the “spirit of the sea,” Boone’s sax floats in gentle waves over the currents of Kenny Werner’s piano. Sylvain’s “Ports of Sorrow” strikes a similar tone, lamenting the instability of the economy and living conditions in Port-au-Prince where there is “no anchor for anger, and no anchor for despair.”

A native of Detroit and a recent Pulitzer Prize winner, Tyehimba Jess offers an impassioned reading of “Against Silence,” speaking out for the victims of police brutality and giving voice to other injustices, including racial profiling and the possibility of a future where “I have an arm against my throat and a bullet in my head.” One of the most powerful tracks on the album, the primary quartet (Boone, Werner, Holt and Hoenig) deftly matches the emotional rollercoaster of intense climaxes and whispered silences.

Another highlight is rapper Donald Brown, II’s “Black Man.” Recorded just a month after George Floyd’s death, the track harnesses the shock and anger of the moment, while addressing systemic racism in the closing refrain, “Someone call the police, it’s a Black man.” Brown, who also provided the synthesizer programming, is eloquently accompanied by his father, jazz pianist Donald Brown, who co-produced the album. Other notable tracks include T.R. Hummer’s “The Sun One (Homage to Sun Ra),” and former United States Poet Laureate Juan Felipe Herrera’s “Poem by Poem,” about the members of the Emanual AME Church killed by a white supremacist in Charleston, South Carolina.

Every track on The Poets Are Gathering is worthy of praise, offering thought-provoking, socially-charged poems backed by a group of exceptional musicians. Liner notes by cultural critic Gene Seymour enhance the listening experience. Highly recommended!