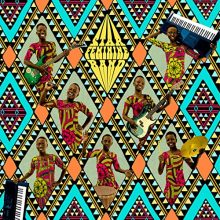 You wouldn’t know it by listening, but the girls of Star Feminine Band had never touched a guitar or drumkit before meeting in 2016. Brought together by a local radio call out offering free music training, the girls, ranging in ages from 10 through 17, use music to channel feelings about equality and empowerment in a male-dominated society.

Hailing from Natitingou, Benin, the music of Star Feminine Band is a captivating blend of African styles. Singing in French and the local languages of Waama and Ditamari, they borrow from Ghanaian highlife and Congolese rumba, as well as from their own local vodun and sato. Their self-titled debut album captures their youthful spirit through impassioned vocals, psychedelic guitar riffs, and an explosion of energetic garage rock. Through their intensive training with local musician and call out organizer Andrè Balaguemon, each girl mastered the drums, guitar, bass, and keyboard, and it shows in their music. On “Peba,” one of their first singles sung in Waama, they emphasize the importance of education for young girls.

The girls of Star Feminine Band are a rarity in Benin. In a musical sphere almost entirely dominated by men, these young girls are playing their own instruments and writing music with Andrè about their daily struggles as young African women. Between their impressive musical skills and the unique ways they are shaking up Beninese music and society, these girls deserve a listen.