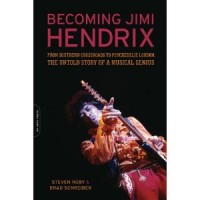 Becoming Jimi Hendrix: From Southern Crossroads to Psychedelic London, The Untold Story of a Musical Genius is the latest offering from Steven Roby, former publisher of Straight Ahead: The International Jimi Hendrix Magazine and author of Black Gold: The Lost Archives of Jimi Hendrix (2002).  With numerous biographies now in print, including those penned by band members, producers and former girlfriends, is there anything left to say?

Roby and Schreiber’s book begins with a brief intro summarizing Hendrix’s formative years in Seattle, but the bulk deals exclusively with the period from June 1961, when Jimi begins his Army basic training at Fort Ord, through September 1966, when he steps off a Pan Am flight at London’s Heathrow airport with Chas Chandler.  Though a short Epilogue summarizes the suspicious circumstances surrounding Hendrix’s death in 1970, and some post-1966 tidbits are scattered throughout the narrative, the book ends rather abruptly just before his career soars into the stratosphere.  If you’re not a Hendrix acolyte, this will likely leave you on the edge of your seat in which case it might be a good idea to have another bio at hand, such as Electric Gypsy by Henry Shapiro (1990) or Roomful of Mirrors by Charles R. Cross (2005).

What the authors do accomplish in Becoming Jimi Hendrix is to flesh out Jimi’s early career playing R&B and perfecting his showmanship on the Chitlin’ Circuit.  Invariably penniless, pawning his guitar every other day, and relying on friends (especially his multitude of lady friends) for food and shelter, Hendrix eschews any degree of security in order to focus all of his energies on playing, learning, experimenting, and ultimately creating a new soundscape that became known as psychedelic rock.  Details are provided about early performances, including an April 14, 1962 talent show at George’s Bar in Indianapolis where Hendrix and Billy Cox lose out to The Presidents (the house band).   Through new interviews with friends, the authors are able to provide first person accounts of Hendrix’ work with Ike and Tina Turner, Sam Cooke, Little Richard, the Isley Brothers, Sam and Dave, Hank Ballard’s Midnighters, Curtis Knight, and King Curtis, among others.  The final chapter, covering the summer of 1966, finds Hendrix playing in Greenwich Village clubs where “Jimmy Hendrix became Jimi Hendrix,” both influenced by and influencing the burgeoning hipster scene―one that was predominantly white. Though Hendrix’s predilection for reverb and distortion was already costing him R&B gigs, his formative period in the Village led to further alienation from black audiences and musicians.

One of the most valuable sections of the book is the “Chronology of Tours and Events, 1962-1966,” which provides a quick reference to all of Jimi’s R&B performances including bands, dates, venues, and personnel, along with influential events such as attending his first Bob Dylan concert. Though Electric Gypsy includes a much more extensive “Life Chronology,” Roby and Schreiber have undertaken extensive research to document specific locations and other details not found elsewhere.

Overall, Becoming Jimi Hendrix is a valuable addition to the Hendrix oeuvre.  If you want to know more about Jimi’s formative years and influences, and how a struggling R&B musician became the most influential rock guitarist of all time, then you’ll want to check out this book.