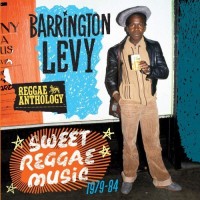 Barrington Levy has a storied career that began in the late 1970s.  Throughout the 1980s, while the transition from reggae to dancehall spelled the end for some Jamaican artists, Levy met the challenge with hit after hit. Working with the likes of the Roots Radics and with support from famous producers such as King Jammy and Scientist, Barrington Levy was one of the best known performers not only in Jamaica but throughout the reggae universe. Taking it upon themselves to showcase the best period in Levy’s career, VP Records has released a two-disc compilation, entitled Sweet Reggae Music, of the various hits released over a five-year period, beginning in 1979 when Levy was only 15.  Sweet Reggae Music is a fantastic compilation that an artist like Barrington Levy truly deserves.

The 40 songs compiled on Sweet Reggae Music are all hits, beginning with Levy’s early introduction into the global scene. “Don’t Fuss Nor Fight,” off of 1979’s seminal Englishman, cemented a career in the UK that would only increase in popularity with the abundance of chart toppers released throughout the 1980s. Other notable tracks include “Shaolin Temple,” “Sister Carol,” and “A Yah We Dah.” And this is only the first disc. Disc two continues much in the same vein as the first, cramming in a fantastic mix of hits. “The Winner,” “Mini Bus,” and the dancehall favorite “Under Mi Sensi” help bring Sweet Reggae Music to its end. It was a hard choice to simply pick out the favorites on each disc; there is absolutely no time wasted with weaker tracks or fluffing the album with unnecessary remixes. Each song is Barrington Levy at his greatest, and VP Records has done a great service in accumulating so many strong tunes. If there’s one compilation for those interested in delving deeper into reggae and dancehall, or simply those wanting to find a comprehensive collection of Barrington Levy’s greatest hits, then Sweet Reggae Music is the go-to set.