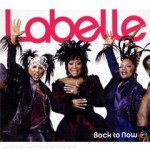 The music industry seems to be interested in only one demographic,  the 15 to 25-year-old listener. What these listeners may not be aware of, is that singers like Kelis and Pink, and the girl groups TLC and Destiny’s Child, may have never existed if it weren’t for the groundbreaking powerhouse vocal group Labelle.

Patti LaBelle, Nona Hendryx and Sara Dash began their career in 1961 as the trio Labelle. They have been transformative, starting out as a doo-wop girl group in the sixties and morphing into a psychedelic funk group in the seventies,  before embarking on their own solo projects in the eighties and nineties. Labelle has occasionally reunited for special events, however this new release is a landmark collaboration, and shows that these women can still make an outstanding record (click here for a video preview).

Producers Kenneth Gamble and Leon Huff, Lenny Kravitz, and Wyclef Jean all lend their talents, showcasing the uniqueness Labelle has managed to maintain, including their ability to sing practically anything effortlessly while addressing issues such as racism, sexism and eroticism. Labelle’s strength has always been their ability to sing varied genres of music and Back to Now is no exception, delving into rock, soul, and funk.  Songs range from slow ballads to classic standards such as “Miss Otis Regrets.”  A stand out track is “Dear Rosa,” produced by Nona Hendryx, which is an ode to the mother of the Civil Rights Movement, Rosa Parks.  “Rollout” embodies female empowerment through declarative statements like  ‘I’m not your superwoman,’ while “Superlover” evokes passion and sexual gratification, unashamedly.  “Tears for the World” laments the current state of the world and social neglect, bringing Africa, Asia, and tragedies like Hurricane Katrina into question, and wondering why we don’t answer.

Labelle has picked up from where they left off, creating timely music that empowers women and addresses socially oppressed communities, while retaining an edge in style and maintaining vocal harmonies and musical integrity.  If today’s music executives were truly interested in good music that contains meaningful lyrics, well-produced tracks, and beautifully blended harmonies, they would produce more CDs like this.