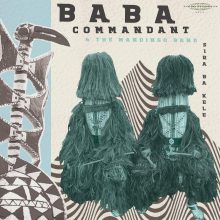 Baba Commandant and the Mandingo Band’s sophomore album, Siri Ba Kele, features the Bukinabe funk sound and the fusion of the mandingue guitar style by the band’s guitarist, Issouf Diabate. Band leader Mamadou Sanou sings with a “riveting growl” while also playing his main instrument, the doso n’goni, which is in the chordophone/ harp family and akin to the kora. The Burkina Faso based group is quoted as featuring the “searing sounds of Sahelian compositions of complex funk and cosmic guitar explosion.” The album follows the success of the band’s 2015 Afrobeat-driven project, Juguya.