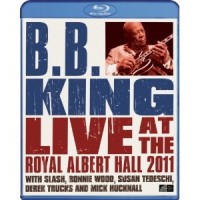 The lights were shining and so was B.B. King in his silver jacket as he took center stage at London’s Royal Albert Hall on June 28, 2011. The performance was filmed and recently released on both DVD and CD (this review pertains to the DVD).

The “King of the Blues” makes the performance special from the start—as he slowly walks to his waiting chair, the 7-piece band plays an up-tempo number while King gets the crowd all worked, throwing out guitar picks and demonstrating his big personality. In his good humored way, he chats throughout the night with the audience, his band, and a host of distinctive guests. This true showman keeps the bluesy pace moving smoothly, from his iconic storytelling to playing classic blues on his famous Gibson guitar “Lucille,” to the solos of his guests and back again to his tales of lost and found loves.

The show gets going with King soulfully playing guitar and singing jazzy renditions of “I Need You So,”  “Key To The Highway,” and “All Over Again.” With humor he gives a history of an oldie but goodie, Blind Lemon Jefferson’s “See That My Grave Is Kept Clean,” which he then plays with a nice swing. The way he pauses for storytelling is reminiscent of a preacher in front of a gospel choir, and as the master that he is, it all flows so well with the piano riffs.

Following is the official trailer for the DVD:

King later plays along with blues musician Susan Tedeschi and her husband, guitarist Derek Trucks of the Allman Brothers Band, on “All Over Again,” “Rock Me Baby, ” and “You Are My Sunshine.”  He is so interactive with them, encouraging Trucks to “slide” on his guitar solos and playfully trading vocal melodies with Tedeschi. The pace never lets up—the senior musician carries the tempo and shines alongside Ronnie Woods of the Rolling Stones, guitarist Slash (formerly with Guns N’ Roses) and singer Mick Hucknall of Simply Red. They pack a punch on the award winning song “The Thrill is Gone” and “Guess Who.” The show also raises the bar on the old time classic “When the Saints Go Marching In,” getting the audience up on their feet and swaying to the collaborative effort of the musicians. The musical guests give an impressive interpretation of this standard and pay homage to King, who is by far one of the most influential living icons in the blues world. The show was exciting, the master made it work magically and the audience left satisfied, knowing they witnessed a piece of blues history.