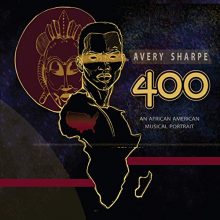 From the arrival of the first slave ships in Jamestown, VA in 1619 to the present, Africans in the diaspora have retained the common African belief that life, religion and music are one. Jazz bassist Avery Sharpe’s new project, 400: An African American Musical Portrait, embodies the very essence of this concept. Sharpe pays homage to the continent of Africa and to African diasporic ancestors as he commemorates the 400 years since Africans were brought to America.

Through the use of early African American musical styles such as ragtime, blues, jazz and arranged concert spirituals, Sharpe tells the story of the African American past. He begins with the song “Arrival” that takes us on a journey from the middle passage to the new world. The following song, “Is There a Way Home,” depicts the mourning of first generation American-born Black slaves and their longing for the home they have never been to: Africa. Sharpe’s personification of Africa as the motherland is established through the song’s closing repeated phrase, “Bless Mother Africa.”

After the Stono rebellion of 1739, many slave owners began to ban African instruments, such as drums and horns, due to their use in rebellions. Some, however, allowed violin and banjo, and as a result “slaves sometimes played…plantation music of their own creation for their capturers.” The song “Fiddler” represents such a performance, featuring a European style melody with piano accompaniment. Sharpe’s album then transitions to the period between emancipation and civil rights with tracks such as the ragtime based “A New Music” and “Blues and World War II.”

The penultimate track, a rendition of the civil rights era song, “Ain’t Gonna Let Nobody Turn Me Around,” concludes with a poem that places African American history in perspective, from slavery to the present. The poet closes the song with the statement, “I am American…I will kneel…I will stand…I will run for office…Never backwards, onward forward.” The poem then transitions into the final tune, “500,” which builds to a climax before quickly fading out. One might consider this fade at a high moment to represent the angst of African American people grappling with their uncertain future in the next century. Electing a Black president (Barack Obama) was a huge moment in African American history, but also left Black people with the question, “What next?” One cannot ignore the oppressed state of Black people in America. The poet in the previous track cited Colin Kaepernick, who was not welcomed back into the NFL after kneeling during the national anthem. Kaepernick refused to stand with a country that continues to covertly oppress Black people. Despite Obama’s tenure in office, Black people continue to be unjustly murdered by police officers, Black women still receive lower wages, and Black men are still incarcerated with longer prison sentences, among many other issues that adversely affect Black life in America. The big question is, will there come a time in the next century when Black people do not have to fight for their humanity?