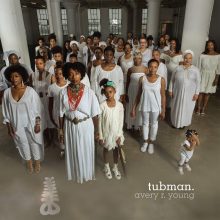 Chicago poet and musician Avery R. Young’s new release, Tubman, is promoted as a soundtrack to his first volume of poetry, neckbone: visual verses (Northwestern University Press, June 2019), and serves as a platform for extending and exploring the book’s many interwoven themes through music. Accompanied by his group, De Deacon Board, Young’s brilliant cross-genre album dedicated to Harriet Tubman certainly stands on its own merits. The provocative tracks frequently delve into socio-political commentary, while Young’s musical palette is deeply rooted in the Delta—“the blues, the gospel, that swamp type of rock ‘n’ roll.” As one might expect from this poet, other influences include The Last Poets and Gil Scott-Heron, as well as ‘70s soul musicians such as Curtis Mayfield and Otis Redding, the Black church, and the Black Arts Movement. Plus funk, lots of funk!

The opener, “Sit Down Job (Mudda Mary),” has all the ingredients of a classic funk track backed by a righteous chorus of sisters, or as Young described the song in an interview, “Jimi Hendrix playing with the Staple Singers.” “Go Head Mary & Weep” is a brief interlude straight out of the church that leads into “Lead in de Wattah,” a potent track that repurposes the Negro spiritual “Wade in the Water.” Young transposes the verses into a commentary on environmental racism and the poisoning of the water in Flint, Michigan, as he sings: “Lead in the water / there’s lead in the water children / there’s lead in the water / and Charlie playin’ God with the water / And, they knew it / they knew, what it would do to the children / yes, they knew it / Charlie playin’ God with the water.” Though the album version is accompanied by strings and chorus, the following a capella performance demonstrates the emotional power of Young’s voice:

Young also pays tribute to iconic female singer-activists on tracks such as the ultra-funky “Get to Know a Nina Simone Song” that references her classic protest song, “Mississippi Goddamn,” and the Billie Holiday themed “Lady Day on Soul Train” that opens with the spoken line, “A song’s supposed to have a blood that nobody notices.” The album closes on the soulful title track, “Tubman,” pitching Young’s gritty vocal delivery against the pathos of blues harmonica in this tale of liberation that’s punctuated by the chorus’s repetitive refrain, “there ain’t no Black folks, blacker than me.”

Avery R. Young’s Tubman carries a strong message across 14 retro-soul tracks that are as supremely funky as they are “unapologetically Black.” Highly recommended!