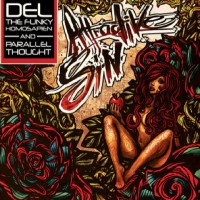 If you like getting lost of the labyrinthine trains of thought Del the Funky Homosapien easily spits out in his well known, funky, relaxed Yay-Area style, Attractive Sin will undoubtedly please you. Though certainly not the best release in Del’s illustrious career, it is still engaging and enjoyable, featuring hook-less freestyles over the horn-heavy, hard-hitting East Coast beats of New Jersey producers Parallel Thought.

Thematically, Del continues to establish his role as a West Coast hip hop elder statesman with rhymes that are nostalgic for days past and that call out perceived foolishness in the current generation of rappers. What separates Del from other aging rappers who might smell of “You kids get off my lawn!” old fogeyness, is that he goes back not just to his early days of rapping, as in the song “Ownership,” but even further back to the history of rhythm and beat in Black American life as seen in this verse off “Charlie Brown”:

Live as Hell,
Hell is live in front of a studio audience
Nationally syndicated,
Penetrating every boobtube, Youtube
With the voodoo straight from Congo Square
(Back in slavery you could play them bongos there)
Talking drums, go ahead call it dumb
And just bragging, but I’ve got a way of zig-zaggin’.

It’s almost as if Del is meta-admonishing young bloods in the hip hop game, not just from his vantage point as a long-time player but from an ancestral knowledge of whose beats are sick and whose flow is tight. While that is certainly a tall order to fill, if anyone has the verbal chops to do it, it’s Del the Funky Homosapien.