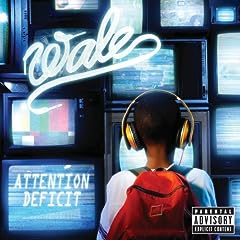 For years the D.C., Maryland and Virginia region, popularly known as the DMV, struggled to secure a strong presence in the hip-hop game. Music from this region had historically been rooted in the go-go sound, a funky mix of drums and horns made known by bands such as UCB and E.U. The DMV’s only relatively strong voice in hip-hop belonged to the ‘90’s femcee Nonchalant, and her conscious hit “5 O’clock.”  Fortunately a young Nigerian-American has become the new face of the DMV’s rising, and the region is poised to reclaim a spot in the hip hop industry.

After five mixtapes, two videos and tons of buzz—including BET’s “Rising Icons”—Wale Folarin dropped his debut album, Attention Deficit, on September 8, 2009. Fans hurried to cop the full LP, singing its praises via Twitter, eventually hailing the album an official trending topic. From the jump, Wale’s signature go-go sound welcomes listeners to familiar ground with the intro track “Triumph,” one of the few feature-less tracks on the album. Some could say the presence of features is a little much, especially Gucci’s appearance on the still infectious “Pretty Girls,” but they tend to work everywhere else. Whether Wale is trading bars with Bun B on “Mirrors,” or bringing to light the errors of a relationship in the personal “Diary” alongside neo-soul great Marsha Ambrosius, he holds his own in lyrical wordplay.

In this interview conducted during a London tour, Wale talks about his album, Nigerian heritage, skin shades, and other topics addressed in his songs (courtesy SoulCulture Media):

There’s a little bit of everything for everybody on Wale’s strong debut. Pharrell aids on the Neptune-produced club joint “Inhibitions (Let It Loose),” while “Shades” is a “The Kramer”-esque retrospective of love and race in today’s society. The perfectly sampled “Contemplate” (which uses Rihanna’s “Question Existing”) creeps with an edge of hesitation toward fame with mentions of Heath Ledger and Frankie Lymon. True hip-hop heads will go bonkers for the K’naan featured “TV in the Radio.” And even the first single “Chillin'” featuring a lazy Lady Gaga, has a little reworking and fits well with the presented collection. All in all, the album is a solid effort to plant both feet in the door. Hopefully Wale “Mr.-Never-Wear-the-Same-Thing” Folarin is but one of many DMV lyricists to come. Be sure to check both iTunes and/or Zune for exclusive bonus tracks.