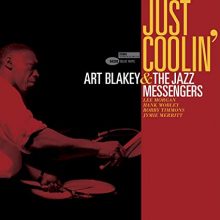 Blakey was famed as a mentor and bandleader. In the summer of 1958, saxophonist Benny Golson brought along fellow Philadelphians Lee Morgan, Bobby Timmons, and Jymie Merritt to create a new version of the Jazz Messengers. Although Golson left soon after, Morgan, Timmons, and Merritt remained with Blakey. Golson was replaced by the big-toned, R&B-influenced Hank Mobley, who had previously played with Blakey from 1954-1956, after that joining the bands of Horace Silver and Max Roach. Mobley composed three of the six tracks on this release with Timmons adding one.

Blakey’s intensity and energy has always led this reviewer to think of him as a jazz drummer with rock & roll energy. All five musicians on this release went on to distinguished careers, with trumpeter Lee Morgan scoring an actual Top 40 hit with “The Sidewinder” in 1964. Mobley was replaced by Wayne Shorter, who later joined the legendary jazz-rock fusion group Weather Report.

All in all, this release would be an excellent addition to any jazz library. It may be sixty years old, yet it sounds as if were recorded yesterday!