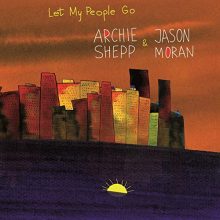 A living legend in jazz, saxophonist Archie Shepp’s six decade career is notable not only for expanding the cannon towards avant-garde and free jazz, but also for the socially conscious and Afrocentric themes of his albums. Five years ago, he met pianist-composer Jason Moran backstage at Belgium’s JazzMiddelheim Festival, and the two have performed together on many stages since that auspicious occasion. In addition to Moran’s many albums and soundtracks, the 2010 MacArthur “Genius” Grant awardee is also known for groundbreaking productions with his wife, Alicia Hall Moran, including Two Wings: The Music of Black America in Migration. Shepp and Moran’s new album, Let My People Go, seems like a natural progression for these two musicians who both actively promote an appreciation for Black history through music.

As Ashley Kahn states in the liner notes, “Even as [Shepp and Moran] maintain their own individual approaches, their mutual ardor for the African American cultural tradition embraces all leaves, branches, and—especially—its roots… In this music, one can hear how, when two deeply connected souls meet, the message in the music is clarified and amplified, how its power is increased exponentially.” Indeed, all of the tracks on this album are deeply moving. Drawn from live recordings at the 2017 Jazz à la Villette festival in Paris and the 2018 Enjoy Jazz Festival in Mannheim, Germany, the saxophone and piano duets cover a broad range of expression, from spirituals to jazz classics.

In his acceptance speech for his NEA Jazz Masters award in 2016, Shepp stated: “My song is a paean, which seeks to recreate the mournful utterance of the first man or woman enslaved. I am the ‘motherless child’ who wails the blues while others smile.” Perhaps this inspired the two musicians to open the album with “Sometimes I Feel Like A Motherless Child.” This extended 8-minute interpretation plumbs the emotional depths of the spiritual, from the elegant piano voicings from Moran to Shepps’s wailing sax, and especially when Shepp picks up the mic and sings the final verses. Listener’s may find it difficult to move on from this powerful track without taking a few moments to compose themselves.

“Go Down Moses” is another spiritual featured on the album, effectively pairing Moran’s classically influenced arrangement with Shepp’s free improvisation. Once again, Shepp sings the final verse, effectively channeling the pathos of the song  concludes “let my people go.” Also featured are a number of jazz standards, including Billy Strayhorn’s “Lush Life,” Strayhorn and Duke Ellington’s “Isfahan,” Thelonious Monk’s “‘Round Midnight,” and John Coltrane’s “Wise One.”

Though the spirituals are the highlight for this listener, the other tracks on Let My People Go are equally enjoyable, with Moran’s eloquent and refined piano striking a wonderful balance to Shepp’s gritty, free form explorations. On a final note, Moran just released his third solo piano project, The Sound Will Tell You, available now via Bandcamp.