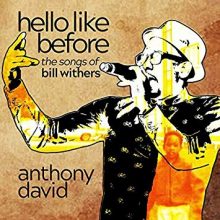 God bless you, Anthony David.  Not only are you paying tribute to perhaps my favorite male artist of all time, Bill Withers, but you titled the project Hello Like Before, my favorite Withers song hands down—and that, my friend, is saying something. When one artist pays tribute to another, especially a legendary artist, it can either go one of two ways. But Anthony David delivers in a huge way! When the Savannah, Georgia native emerged on the scene in 2004 with his album Three Chords & the Truth, some compared him to Bill Withers and guess what? They were spot on. Like Withers, David ain’t flashy, just straight forward.

Hello Like Before opens with Wither’s classic song “Grandma’s Hands.” David begins with a simple acoustic guitar accompaniment like the original version, but then adds layers of contemporary beats. This is followed by the title track. If you’re familiar with Wither’s version of “Hello Like Before,” the acoustic guitar enters with strumming chords, followed by the vocals and lush strings. Though the words and story are likely to sweep you away no matter who is singing, David’s voice and delivery nail it. On “Lovely Day” once again David keeps it simple, sticking with Wither’s formula.

Though featured on the 1972 album Bill Withers Live From Carnegie Hall, “I Can’t Write Left Handed” is perhaps one of Withers’ lesser known songs—one he wrote as a protest to the Vietnam War. The lyrics really touched David, who also served in the military and began writing songs while stationed in Iraq. He explained, “When I first heard this song, it stopped me in my tracks. I had gone to Desert Storm and the way he described the mentality of young men who go off, I don’t think anyone has ever really described in a song before.” While Withers began the song with a narrative about soldiers serving in the Vietnam War, David talks about his own experiences. This is the highlight of the album, with David revving things up just a little with guitar, and giving an emotional delivery. Not many know about this track, but that’s sure to change.

Hello Like Before: The Songs of Bill Withers is a gem. Since we know Bill Withers isn’t coming out of retirement any time soon, this will have to do. Fine by me!