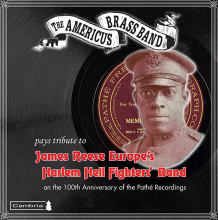 The full title of this fantastic project is self-explanatory: The Americus Brass Band Pays Tribute to James Reese Europe’s Harlem Hell Fighters’ Band on the 100th Anniversary of the Pathé Recordings. At the dawn of the 20th century, Jim Europe was making a name for himself on the musical stages of New York as a talented pianist, composer and conductor, later leading the famed Clef Club Symphony Orchestra as well as his own group, James Reese Europe’s Society Orchestra. In mid-1916, Europe’s life changed course when he was asked to lead an all-black regiment band on the eve of WWI. After sailing to France in January 1918, Europe’s group quickly became the most acclaimed band in the army. Renaming themselves the “Hell Fighters” (after the Black soldiers of the 369th Regiment), they toured France, thrilling both American and French audiences with their performances of the syncopated music newly designated as “jazz.” At the close of WWI in February1919, Europe’s Hell Fighter’s Band returned to a hero’s welcome in New York and one month later entered the recording studio.

One should note that five years earlier, Europe had gained the distinction of leading the first recordings by an African American orchestra for the Victor label. For the March 1919 Pathé sessions, 22 titles appear to have been recorded, including a mix of Tin Pan Alley songs, spirituals, marches, rags, blues, and jazz. The repertoire was a far cry from the standard military band music of the era, and are among the earliest ragtime, blues and jazz recordings by African American artists. Tragically, this signaled the end of Europe’s career—two months later he was stabbed following a concert in Boston and died hours later at the age of 39.

For over 40 years, the Americus Brass Band has been dedicated to the authentic performance of 19th and early 20th century brass band music on period instruments. Through concerts, recordings, Civil War reenactments, Hollywood soundtracks, and educational programs, they’ve shared their passion far and wide. For the ABB’s centennial tribute to Europe’s Harlem Hell Fighters, music director Richard Birkemeier, who also produced the recording and liner notes, selected ten titles from the original Pathé sessions and two titles from Europe’s earlier recordings. After extensive research, which involved locating the original band arrangements used by Europe and comparing them to the original recordings, every attempt was made to recreate the music as performed, including any jazz stylings added by Europe’s musicians. Additionally, the technology at the 1919 sessions would only have allowed about a dozen musicians to record simultaneously, so ABB’s 24 members more closely approximate the depth and breadth of Europe’s full ensemble.

The compilation appropriately opens with “St. Louis Blues,” composed by the “Father of the Blues” himself, W. C. Handy.  In 1917, Handy met with Europe in New York to discuss the possibility of forming military bands, and presumably took the opportunity to plug his brilliant new arrangements for brass band by a young William Grant Still. Europe enthusiastically embraced Handy’s “St. Louis Blues,” “Hesitating Blues,” and especially his “Memphis Blues,” which became wildly popular through the Hell Fighter’s performances in France and America. All three are included here, and indeed the performance of “Memphis Blues” (arr. by Bob Haring) is a precise, yet gleefully raucous performance in a tempo that’s much faster than Handy’s piano recording. ABB’s rendition of “St. Louis Blues” is a wonderful demonstration of their meticulous efforts to replicate the Pathé version, including the repetition of the chorus six times, each one showcasing a different instrument and clever improvisations.

Many agree that one of the highlights of the 1919 sessions is “That Moaning Trombone,” composed by former Sousa band member Carl D. Bethel. Birkenmeier admits that his group didn’t even try to match the impossibly fast tempo of Europe’s band, but he was apparently listening to a compilation that transferred the Pathé discs at a faster speed.* Depending on which transfer expert you align with, the ABB’s tempo likely approximates the original. In any case, ABB’s trombone section (Jerry Wheeler, Jeremy Swem, Loren Marsteller, Phil Keen) deserve a shout-out for their nuanced performance.

Two of the tracks are closely associated with the Hell Fighters’ years in France. “How’ Ya Gonnna Keep’em Down on the Farm (After They’ve Seen Paree)?” was a hit song celebrating the end of the war, and songwriter Noble Sissle was the featured singer for the Pathé session. Taking over the vocals for ABB on the brief chorus is trombonist Jerry Wheeler. More interesting from both a musical and historical perspective is “On Patrol in No-Man’s Land,” an autobiographical song composed by Lt. Europe while leading combat troops in France, where at one point he was hospitalized from a gas attack. Sissle, who was also a member of the Hell Fighter’s Band at the time, visited him in the infirmary and contributed to the arrangement as well as the vocals on the original version. ABB’s recreation captures the theatrical nature of the piece with considerable gusto. As Jerry Wheeler merrily sings lines such as “don’t stop lobbing with those hand grenades, there’s machine guns, holy spades!” and “nerve gas, put on your mask,” the rest of the band enthusiastically adds the appropriate sound effects of machine guns and shells followed by whoops and hollers when they hit their marks. Campy, but entertaining!

Other gems include “Dark Town Strutter’s Ball” by African American songwriter Sheldon Brooks, and Europe’s “Congratulations (Castle’s Lame Duck Waltz),” composed in 1914 during the period he performed with the dancers Vernon and Irene Castle. The remainder of the songs are popular tunes and novelties that are a fun listen but not as significant as the early jazz and blues recordings. Nevertheless, they are still full of jazzy embellishments and shave-and-a-haircut tags that are a testament to James Reese Europe’s genius and his incredibly skilled musicians.

Many thanks to Richard Birkemeier and the Americus Brass Band for recreating the 1919 Pathé recordings by James Reese Europe and his Harlem Hell Fighters’ Band. Their performance is as virtuosic as it is revelatory!

*NOTES: For further reading on James Reese Europe’s recording career, I highly recommend the book Lost Sounds: Blacks and the Birth of the Recording Industry, 1890-1919 by Tim Brooks. A noted authority on early recording history, Brooks devotes an entire chapter to Europe. Regarding Europe’s original 1919 recordings for Pathé, they have been released on two compilations: James Reese Europe’s 369th U.S. Infantry “Hell Fighters” Band – The Complete Recordings (Memphis Archives Records, 1996) and an out-of-print release from the International Association of Jazz Record Collectors with transfers by noted jazz reissue engineer John R.T. Davies. At least some of the transfers on the former compilation are at a faster speed, and apparently opinions are mixed as to which tempo most authentically replicates the originals. In an email from Birkemeier, he says he compared the pitch of “That Moaning Trombone” with the other recordings (and modern pitch as well), and believes the faster tempo is correct. The ABB recently performed “That Moaning Trombone” at the faster tempo, which Birkemeier says he now prefers.